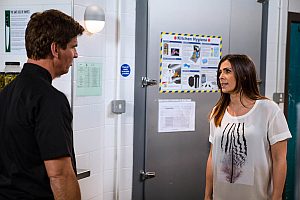 Sarah is deemed cured and makes her way to Gary in the ginnel. Michelle considers termination, unable to cope with the possibility of an ill husband and baby. Michelle ends up confiding her fears to Robert, of all people. Steve gets his results. Was all that worry for nothing? Bickering relatives cause Ken to kick off. Caz is back and she's putting on an act, pretending to be afraid of Maria. Later, Caz seems to be missing and all suspicions are pointing in Maria's direction. Beth finds the way to Kirk's heart. What lengths was Seb willing to go to for Faye, and is it love or a bad habit? Nick and Leanne have the 20 week scan. The Rovers has a Halloween party. Zeedan discovers Sharif used gym money for personal use and later, Zee asks Rana an important question. Dev has a question for Erica.