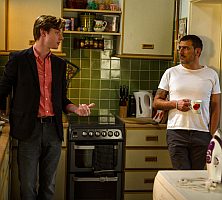 Anna discovers Phelan and Vinny's scam and tells Michael who looks for evidence. Phelan desperately races to stop him. With the plan rumbled, will Phelan and Vinny make it out of town before the mob comes looking for them? Ken is allowed to recouperate at home and is quite happy to see Adam and Daniel. Adam causes trouble at the Bistro. Daniel seems to have secrets. The awards ceremony is cause for disappointment for Gemma but Rita takes her under her wing. Brian has a new career. Roy helps make wedding plans with Cathy but his heart may not be in it.