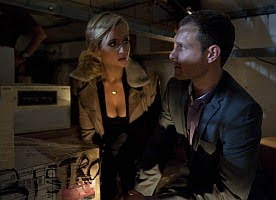 Get Smart award: Agents 86 and 99 in the warehouse recovering their wine!


Frankly obsessed award: Gold Star: Sally is right in her element and Frank's put her there.

All grown up award: My hasn't David matured? Or not...
Oh Grow Up award: Owen kept the football and started up a feud with David! Nick needs his own place!

Keystone Cops award: Brass Star: When the guard dog starts to bark its head off, you don't just hush him and lead him out.


She's just not that into you award: Sophie is crushing on Amber, gets rejected so decides to elope with Sian.

Stroppy Mare award: That Faye is really getting on my wick. So is Tina.

Style fail: What does Rosie look like with them black eyebrows!?

Hopeless award: Where was Fiz and Hope at the ceremony, by the way? Eating Hope's birthday cake?

Stalker in Training award: I think Kirsty has a dangerously obsessive side to her. She's certainly quick to jealousy.

Miraculous Perception award: Kirk... how *did* he guess that bride-to-be didn't want to get married? And he got lucky!! 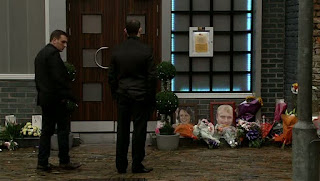 Flashback award: Shaky Star: Peter doesn't seem too happy to think about all he's got to be grateful for this past year. The more they talk about it, the worse he feels. (Excellent "Day in the life" episode as well!) which all leads to...the Off the Wagon Award.


Showdown at the OK Corral award: Underworld vs Fosterworld and the Silk Wars. We don't have your fabric. Oh no. But Sean's sporting a handkerchief made with it. Nyah!

Pants on Fire award: Sucker star. Karl is supposed to be working. He's at the casino. And he lost. And said he'd run out of petrol. (It doesn't take 6 hours to get an empty tank filled in the middle of the city)

Fashion Clash award: Sean's red lacy basque over a pink and white striped shirt. (I *hate* pink and red together!)


Lines of the Week:
Nick "We're liberating, not stealing." Eva "Tell it to the judge!" Nick "I wish that was funny!"
Sally to Sophie "For a born again Lesbian Christian, you haven't half got a one track mind"
Eva about Tina "She's a bit highly strung wasn't she?" (Pot? Kettle?)
Karl to Stella "Mother. Businesswoman. Friend to the needy. Where do you find the time!" (Now christened St. Ella!)
Michelle "What's the most useless thing you can think of?" *Kirk walks in*
Frank "Stalin was more forgiving than you, Mother"
Lloyd "Are you familiar with the concept of Chaos Theory?"
Peter "I'll get a taxi" Tommy "Do you want a number?" (um, Streetcars? Around the corner?)
Peter "I'm an alcoholic and all I can think about today is getting drunk"
Kylie "It just brings back stuff I'd rather forget" (like blackmail, you mean?)
Mary "People like to suck on something hard when they're standing in the cold"
Owen "I brought up two daughters" (bullied them up, more like)
Sunita "Whoever said a family that plays together stays together never met Dev"
Owen "You may mock" David "We will, we will"
Sally about Frank "He's pushed me into the limelight and wants me to shine. I'll tell you something else, Shine I Will!"
Tommy "Don't worry, Ty, people laugh at you all the time"
Posted by Tvor at 08:18