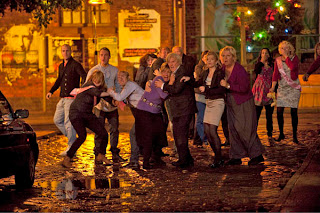 (This post was originally posted by Clinkers (David) on the Coronation Street Blog in November 2011.)

It was one of the doom-laden phrases being flung around this time last year. After the tram crash had brought carnage to the cobbles, life would never be the same again. With this is mind, we all sat glued to the trauma of Tram Week and the aftermath. What has been the lasting impact though, if any? 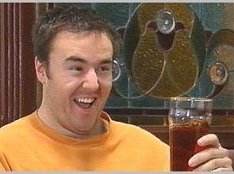 Almost twelve months on and the most palpable sign that all is not right comes in the form of the simmering tension between Kevin and Tyrone. The latter has passed through a range of emotions in the past year - shock, hurt, anger and maybe even a little guilt. What we have been left with though is, arguably, a much improved Tyrone. He's free of a mundane marriage and a feckless wife. There's an element of fun in his life thanks to a sassy new girlfriend and the inanity of housemate Tommy Duckworth.

Sally Webster gained some sympathy in the immediate aftershock of last December's revelations. As usual though, she lumbers from one disaster to another whether it be hooking up with a boyfriend who looks like a Punch & Judy puppet or deciding that working with a rapist is a positive career move. Thankfully though, the storyliners seem to have resisted the obvious path of teaming her up with dreary old Kev again.

Personally, I don't think the characters who left are particularly missed. Charlotte Hoyle was only ever a demented pantomime character and so, no love lost there. Poor old Molly's character had been ripped apart by less than believable (or sympathetic) storylines so her story was over anyway. This is probably true of Ashley Peacock but more so of the dreadful Claire, another who suffered at the hands of bizarre plot twists. Even her exit was based on some ridiculous criminal act. Off to France she went, a fugitive, yet still managed to sell her house to Lloyd. Someone should tell Interpol.

We were promised new characters and in fine soap style, some have worked (Brian Packham, Kirsty Policewoman), some are so-so (Stella Cindy from EastEnders, Tommy Duckworth) and some who really don't seem to have gelled at all (the robotic doctor, anyone with the surname Gray).

Is Weatherfield a much-changed place since this time in 2010?
Posted by Tvor at 12:09