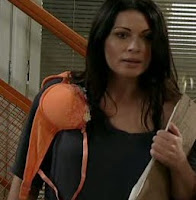 Frank has sent Anne with an offer for Sally and she snapped his hand off with it. Now she's got the job she always wanted, lording it over a factory of workers. He and Anne said all the right things and waved money under her nose to draw her in. Sally took great satisfaction in being the one to tell Carla about the new factory and she's sucking up all Frank's flattery.

Meanwhile, the workers left are standing behind Carla. The ones unemployed are being headhunted by Sally for Frank so Becky and Eileen went to work for him. A paycheque is a paycheque. (When did Becky ever have experience as a machinist, by the way? She said she was a good one, but it didn't seem like she's ever had a decent job before she came to the cafe). Carla is struggling and taking it out on the loyal staff that stayed with her.


So Paul does have a wife but there's a twist. She's got Alzheimer's! That's got to put him in a tough spot but it puts Eileen in an even tougher one. He did stay over before she found out and slipped out before she woke up. Not a good sign. She found out and confronted him and then confronted his wife when she found out about the wife's illness. Paul lays on the sad story, how lonely he is etc. I can well imagine that it's very hard for him and I do believe this isn't something he did lightly. Eileen still needs to stand back and


It's so obvious that Tommy's jealous of Matt but Tina isn't cluing in that he really likes her! Kirsty wasted no time with a few sarcastic barbs at Tina. I think one is as bad as the other really. 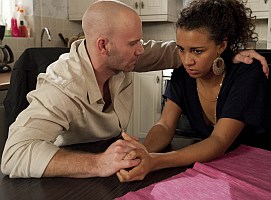 Chris got really good news. The tumour has shrunk. But it's still there, right? Still it's good but he's not letting Cheryl know. The better to manipulate you with my dear. Now Cheryl's all about family and togetherness. Lloyd was being reasonable, about Chris' future care but of course Chris made sure Cheryl didn't get all the details and he moved in for the...er... kill so to speak. He's got her right where he wants her now, in his bed! She's feeling guilty, Chris is feeling smug and Lloyd is clueless.

Rosie won't share a flat that Jason shared with another woman. Jeez, i wouldn't mind. It's been completely rebuilt since he lived there with Tina anyway. She's determined that he's going to sell it. By the way, wasn't his deal with Tina that they do it up and split the proceeds when it's sold? I don't think he's tried all that hard. I don't even think i've seen an estate sign up, have you? Meanwhile, Jeff is schmoozing another model but insists he's not mixing business with pleasure. Sure.

But it's making her more determined to break up Jeff and Sally but boy did she go about it the wrong way! Trying to seduce Jeff in her mother's house so her mother thinks there's something going on, guaranteed to break them up. Sally is going to believe her little girl of course. Sophie couldn't stand seeing her mother so upset, blew the whistle and it all hit the fan. Sally keeps Jeff but Jason stays with Rosie too. I guess that's something.

Could Rosie's outfit be any skimpier???? I'm beginning to seriously dislike Mary these days. I used to like her but she's becoming more annoying and dislikeable than she is quirky. Loved Kirk giving Mary and Julie hell for bickering. Sylvia won the competition, the one she entered when she fished Mary's entry out of the bin. I understand Mary and Norris both being upset but they *did* throw it out. You know why Norris wasn't overly bothered about not winning the cruise, right? Because it was a cruise for two and he'd have to take Mary!

Neither Sophie or Rosie are too happy about Sally's closeness with Jeff. Sophie's missing Sian and feeling a bit insecure. She sure blew off Kevin and the babysitting job quick when Amber asked her to go out. I bet she wishes now she hadn't. Amber, playing games, spiking Sophie's drinks and later she kissed Sophie to put a bloke off his stride but it threw Sophie for a loop. Hey, that was nice and how can she like it if she's in love with Sian? So what does she do? Propose to Sian to prove she hasn't got a crush on Amber. Sophie luv, you're only human but on top of that, you're only a kid with not a lot of maturity. She's too young to just run off and do it and neither parent is giving permission. I'm sure you can see where this is probably going. 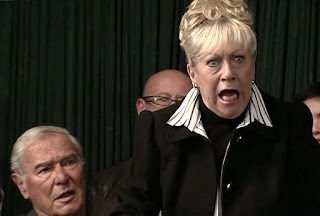 Big story of the week, Fiz's trial. She's scared and with good reason. As trials go, it's all circumstantial evidence but they always make the people testifying look really bad. They always trick them into saying the wrong thing. There's always someone that stands up from the gallery and screams out. This time was both Colin's mum and Fiz herself protesting her innocence when dishy DC Redfearn was testifying. The prosecution said Fiz had time during the tram crash to kill Charlotte and move the body. Excuse me? She was busy giving birth in the factory. Why is the prosecution allowed to badger her? It's true, though, even though the evidence is stacked against her, it's circumstantial and there's no forensic evidence to prove it. 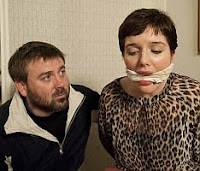 But looky who's hiding around corners and behind trees! Stape's back! Does he turn himself in to save his beloved? Does he heck. He kidnaps Rosie. Again. To instruct her in all his crimes so *she* can tell the court/police. Isn't that hearsay? Why yes it is. You'd think John would have researched that little point as well. I never really understood that. Someone tells you something, or you hear someone say something, it should be acceptable. It was pretty funny, though, watching John instruct Rosie using charts and visual aids and then marking her quiz answers with a red pen. (Did you notice, all that tying of a gag around her mouth and her lippy stayed on perfectly). 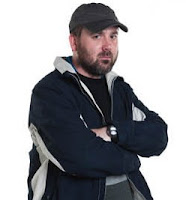 He's still selfish though. He wants to save Fiz but he won't confess in person. He blames it all on Rosie for flashing her legs at a weak English teacher. No way. Adult. Child. Notice the difference? Nice touch, having John call himself Mr. Chips a la the movie Good Bye Mr. Chips. Last fall when this was first on, I did a bit of a round up on that.

The verdict? Guilty of Colin's murder but at the same time, Kevin and Jason find John and Kevin goes chasing after him, right into a car crash. So there he is at last, confessing to a witness and camera and spending his last minutes with Fiz and the baby. She gave him hell but after everything he's done to her, she's still spineless enough to be sweet to him at the end. I suppose in those moments, you can have a bit of compassion. She says it's for the baby's sake but she hasn't really let go of the old feelings. I did think his last words would be "I only wanted to teach" 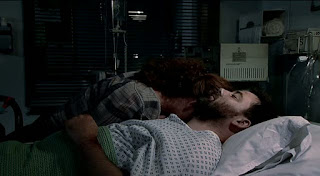