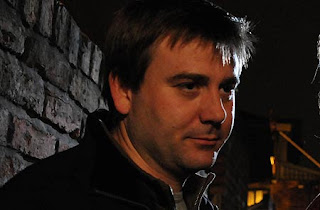 (This post was originally posted by David (Clinkers) on the Coronation Street Blog in October 2011.)

And so the Grim Reaper once again pays a visit to Weatherfield and this time collects "Mr Chips" himself. John Stape is no more. Weep for him. Or maybe not. Given that the character had only been around for a few years, he certainly packed a fair bit in. Sometime teacher, sometime café assistant, sometime murderer. It would be fair to say that he didn't particularly excel at any of these. He was a useless kidnapper too as dozy Rosie discovered on two occasions. John was like one of those shambolic supply teachers you used to get in schools years ago. Eyes like Bambi caught in the forest fire, paper trailing from an hastily locked briefcase, gravy stains down his tie.

For all of this though, John retained some sense of humanity and, even to the bitter end, a sense of humour. The character craved normality and a family yet was thwarted in all attempts to secure this - usually thanks to his own stupidity. Will he be remembered as a classic Corrie character or will we forget him? John has certainly been unique - deranged schoolteacher with misguided principles. Will his death be the making of Fiz who can now bloom, free of a disfunctional marriage?