Heartbroken in the bog 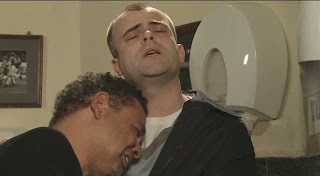 (This post was originally posted by me on the Coronation Street Blog in November 2011.)

I wasn't going to go into the Lloyd/Chris/Cheryl debacle again but I just had to say that I felt so bad for Lloyd tonight, finding out about Cheryl and Chris. You don't often see heartbroken men on Corrie like that. Usually they get angry or drunk but Lloyd was weeping in Steve's arms in the bog! This is the beginning of the end, boys and girls and Lloyd isn't going to get over this any time soon.

Naturally he would beg her to stay, promise to forgive her. He's desperately in love and can't accept that she just loves Chris more than him. After that comes the anger and that might just eat him up. I did laugh a little at the background music he had playing when Steve went to see him - Dusty Springfield singing: "If you go away"

Will there be an attempt at a reconciliation? If there is, it will be short lived. It won't be long before Cheryl finds out about Chris' lies about his health because you know secrets never stay secret on a soap. I'd say chances are pretty good that she'll be the next broken hearted one crying in the bog when that comes out.
Posted by Tvor at 20:46