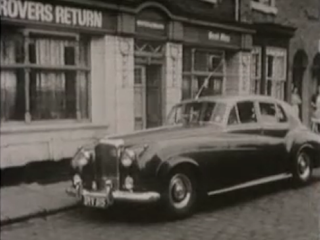 (This post was originally posted by Chewy on the Coronation Street Blog in December 2011.)

KornerKabin of the Digital Spy soap forums brought up an interesting video of a 1964 episode in which there is an exterior shot of the Rovers Return, the only problem being, it looks nothing like the Rovers we know today!

Although in the 1960's end credits the Rovers looked different from this version too, and not only that, the Mission Hall was right next door to it, and even the street looked different back then, as each house had it's own bay window, instead of the joined ones that started to appear as the 1960's went on.
Posted by Tvor at 12:46