Could Rosie bring Frank down? (Speculation and spoiler) 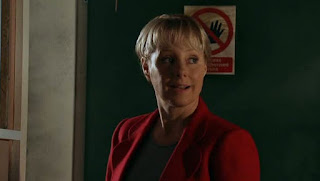 (This post was originally posted by me on the Coronation Street Blog in December 2011.)

This blog posts talks about a character that will soon be leaving Coronation Street!!


I know what I've said in the past, about my predictions that Sally will be the one to bring Frank down. Others have speculated as well, that Frank will press his attack on Sally, thereby making her realize that Carla wasn't lying after all.

But the more I think about it, and as I watch how this story is unfolding, *and* keeping in mind the upcoming departure of Rosie Webster at some point, I'm starting to think in a new direction.

Currently we're seeing Sally obviously developing an infatuation with the suave Frank Foster. She's blooming with confidence as her ideas are helping to bolster the company and she's basking in praise from both Frank and his mother Anna. Frank may even take advantage of this and try it on with Sally who, (er...) frankly, doesn't really seem like his type but as she knows what's going on and is on his side, he may figure that's easier than meeting someone new. So, Frank may get romantic with Sally and I think Sally won't push him back. She'll be flattered and pleased and they may even end up in bed, fully consenting adults.

What I think could also happen is that Rosie will take it upon herself to try to rid her mother of this man that she believes did rape Carla. After all, she used to work for Carla herself and looked up to her as a business and style icon. There are two ideas I had:

1. What if she tries to put a wedge between Frank and Sally and Frank takes exception. Maybe Rosie is the one that Frank attempts to assault?

2. Or maybe she'll just flirt with Frank a little, which he'll take as encouragement from a beautiful young woman and move in. Rosie objects, Frank presses, his mother interrupts and it opens her eyes.

Either way, Sally will believe her daughter and she'll be like a mother lioness, turning against Frank and throwing him to the wolves in the jury box.

What do you think? Could Rosie be involved in this somewhere along the way? It could then lead to Rosie leaving Weatherfield somehow.
Posted by Tvor at 08:52