(This post was originally posted by Fat Brenda on the Coronation Street Blog in December 2011, reposted with permission.)

Oh loveys, Leanne is beside herself. She’s been walking up and down the cobbles in that red coat of hers asking everyone if they’ve seen him… everyone that is except the one person she should be asking – Carla! 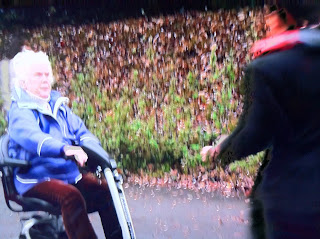 Ken was furious. Of all the hundreds of children he’s got dotted around the globe he reckons that Peter is the most trouble. In fact, Ken is one of the reasons that there has been such a population explosion in the past few years. He sits on top of a family tree that has more branches than flamin’ Nandos!

“But Brenda, he’s only got four kids and Tracy!”

That we know of, loveys. That we flamin’ know of!

After I found out he was back on the booze I looked through the wastepaper bin at the bookies in case he’d left any voddy in his bottle and I found his speech. Oh loveys, it’s a rum do. I’ve written it up for you to have a look at:


“It’s been a year since the tram crash changed things forever (well for a fortnight anyway). I survived and sometimes I wish I hadn’t. Ashley should be stood here now, not me. Ashley never hurt anyone – well, except all them animals he butchered.
Hang about… I need a drink…
What are you lot looking at?! Yeah I’m drunk! So what! I’m Peter Barlow and I’m an alcoholic! Happy now?!
Oh look, there’s me dad! Go on dad give me another lecture! Ken Barlow, the only man to take the moral high ground when he’s had more affairs than... than... my wife! My flamin’ wife; Leanne!
You see ladies and gentlemen, when I was lay dying in that hospital the only thing she was worried about was that her affair with Nick would be discovered. Me dad knew, didn’t you Ken? Everyone knew except me! Even Deirdre! They all kept it from me! The Barlows - we're like a barrel of bad apples, we contaminate everything we touch... who wants a fight? Dad? Let's have it out... me and you!
Hang about, I’m just gonna have a drink…
Emily flamin’ Bishop! “Oooh will you write a speech about the worst time of your life?”
Thanks for that Emily! THANKS A LOT! THIS IS YOUR FAULT!
I didn’t ask for any of this!
Hang about, I’m just gonna take another swig…
>I hate you all… except you Carla. You’re lovely you are. I flamin’ love you… and our Si, I love him an’ all… but you Carla… when I look at you I feel complete…
I’m gonna be sick, hang about…
Show me the way to go home… I’m tired and I want to go to bed…”
Well loveys, thank Cliff he didn't make it to the memorial service! It's word for word is that!

The other news this week is that Becky is me new boss! What the flamin' hell? Has she not inflicted enough damage on Streetcars with all the money we're short of after buying Max? Will she make Steve pay back the Max money I wonder? That would be a bit cruel even by her standards.

Me favourite cuddly scouser is going and I will miss him more than he will ever know - he always bought nice biscuits did Lloyd. He's mortified that he made a pass at Stella. If I had a ciggie for every time I made an unsuccessful pass at someone I'd have two duty free cartons by now!

I'm off down to Weatherfield police station now, I've been asked to come in and answer questions relating to me relationship with Tyrone cos Kirsty saw me talking to him yesterday - two words: bunny boiler!
Tweeter me here.
Posted by Tvor at 12:32

Ach I'm sad to see LLoyd go too...I always liked him. He and Steve made such a great team.

Oh and seriously...ya gotta take the word verification off...it's a huge pain in the ar*e

I'm sorry about the verification. It really does help reduce the spam comments.