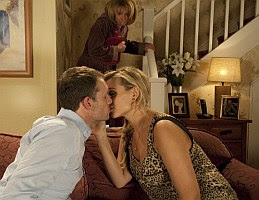 Here's a sneak preview of next week's Coronation Street in Canada.

It's been a year since the tram crash. Peter throws a major wobbler and ends up where he shouldn't but where he's probably wanted to be all year while Leanne waits to celebrate their first anniversary. Tyrone looks back with Kirsty's support. The residents reflect at a memorial ceremony.

Max moves back to the Street and it's a bit rocky. There may be a new understanding between Becky and Kylie. David and Owen are feuding over Owen's new project. Nick and Eva do some sleuthing and end up in a clinch.  Stella's not best pleased.

Friends are trying to help bolster up Lloyd but he's struggling and makes a stupid move when the helpful hand of friendship is offered.  Meanwhile, Karl succumbs to the temptation of chance.

Carla's back in charge in the factory and wins a little victory over Frank.  Tina continues to have problems with police interference. This time it's a clamp on Rita's car after Tina and Kirsty have words. Sophie deals with a growing crush and moves up the wedding plans to prove it doesn't matter. Sally objects so the girls take matters into their own hands.

For more detail and pics, check out the Moosejaw Mercury on Corrie.net
Posted by Tvor at 12:46