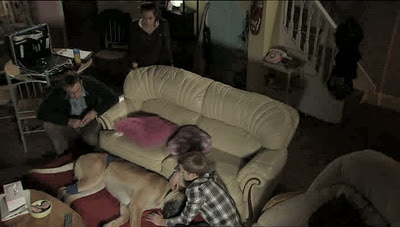 Pants on Fire award: Ciaran lying to Michelle about the wedding venue booking, about falling out with Peter, gambling, lying to Nick about being sick when he's had to serve at that do he cooked for. He got caught and got sacked!

Heart warming award: Gold Star: Becky and Roy. Becky telling Steve where to get off.
Silver Star: Rita and Dennis, her trying to pretend she's not smitten.

Drunk Continuity Fairy award: Sloppy star: Ciaran wanted Peter to be his best man for the wedding happening on Friday. Friday was also the deadline for the venue deposit and Michelle's wedding dress shopping day. So when's the wedding again?
Sloppy Second star: Also, I thought Marc was Nick's wine supplier, but now we hear the wine supplier has gone bust? Was that Marc? Why didn't he say so if it was? And how did Kirk know about Karl's big win? He left before that happened. Grapevine, maybe. 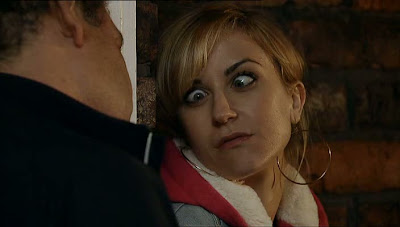 How do you like me now award: Chris's lies are exposed, he's sacked, unhoused and barred! And... he's gone too! (change the locks, Jayboy)

Cold Feet award: Dennis ran off from his last fiance.

Why would anyone think that Dennis would even have anything to do with the Benefits office? He'd be drawing a pension by now, surely? (And I'll keep saying so until someone actually mentions it on the show!) 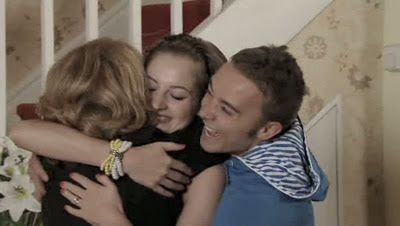 True Friend award: Gold star: Kirk. What a little blinder he was this week, all around!

Snotty Cow award: Faye telling Katy she can't have her room if she has to move in. And Why would she? Owen hasn't given up his flat has he?

Rubbing salt in the wound award: Cheryl leaves Lloyd and moves in across the road and then Finds out about Chris' lies so she high-tails it to Lloyd to see if he'll have her back. I'm so glad he didn't.
Rubbing her face in it: Matt's ex girlfriend sure wasted no time showing Tina up.

Nasty Troll award: Black Star: Norris Cole really is contemptible. And Sally isn't far behind him. And Rosie was *not* nearly killed!

Gullible award:: Did Tommy and Ty really use cheesy 1950s sci-fi SFX? and Brian fell for it?!!

Rolling Stones award: All the men under the women's thumb and teasing each other about it. 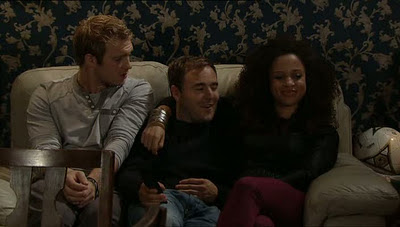 Lego Furniture award: Why does everyone on the Street have mini-sofas?

Disintegration Award: Was there a nuclear bomb underneath that sofa? How on earth could it have burned through to the bare frame that fast?

Lines of the Week:
Chesney "He's not just a great dane, he's the greatest Dane ever"
Chesney about Katy "She thinks it's a competition between her and Schmeichel. She needs to grow up!" (Oh? I think that's the other way around kiddo)
Tina to Tommy "You're princess will come one day. You'll just have to be nice to her guide dog"
Lloyd "The generation that has never heard of James Brown is now having babies"
Norris "If i was slaughtering casual aquaintances in the front parlour of Number 3, I think you'd notice"
Cheryl "I don't want to look smug" (so you held hands with Chris right under Lloyd's nose. Nice.)
Ciaran "It's complicated" Michelle "And I became a thickie..when?"
Kirk "I hate being me sometimes"
Norris "Discretion's my middle name" (*koff*)
Becky to Lloyd "My pain beats your pain every day of the week and twice on Sunday"
Cheryl to Chris "You're sicker than I thought"
Norris "Utterly Foolish Occupation. U.F.O."
Norris to Rita "The words 'touch' and 'nerve' come to mind"
Eva about Gail "Did you see her face?" Nick "She always looks like that"
Becky "I'll think of you when i'm smashing coconuts with a rock"
Maria "I'm sorry, she's very highly strung" (good excuse, might as well use it for all occasions)
Michelle "Is this some kind of parallel universe?"
Becky to Roy "Why can't I be more like you?" Roy "Think yourself lucky" (can't that man just break your heart?)
Norris "If looks could kill, I'd be under the factory floor now" (How many times would that make over the years!)
Becky to Steve "You crawl back into that miserable cow's miserable mother's miserable house and leave me alone for good!"
Posted by Tvor at 08:36