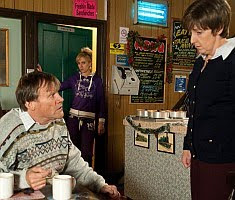 Peter and Carla's affair is underway. His plans to reveal all or force Leanne to break with him don't go as planned and news of their affair could adversely affect Frank's trial. Thus, the lying and sneaking around begins but Stella's suspicious. Meanwhile, Karl gets the wrong end of the stick where Lloyd and Stella are concerned. Lloyd can't seem to pull himself out of his depression so he makes a decision and Becky makes one too.

But Tracy thinks Becky's was a way to get closer to Steve and break them up. When Becky tries to woo a client on behalf of Streetcars, Steve intervenes and then Tracy assumes the worst and races to stop the thing she fears. It ends in tragedy for Tracy who swears her mother to secrecy, fearing she'll lose Steve. Tracy later takes advantage and turns the tables on Becky, ensuring she gets the blame. With almost everyone against her, even Roy and Hayley seem to have doubts, and Steve making a committment to Tracy, Becky hits bottom.

Chesney is selling Christmas trees but when it all goes wrong, he's far from home when Katy goes into labour. Will he make it in time? Kirsty moves in with Tyrone but shows definite signs of jealousy and possessiveness. What's Tyrone got himself into now? Eileen reaches out to Paul at Christmas. Gary is jealous of Izzy.

At the Webster house the wedding preparations are in full swing and Sophie is increasingly anxious.


For more detail and photos, see the Moosejaw Mercury at Corrie.net
Posted by Tvor at 12:36