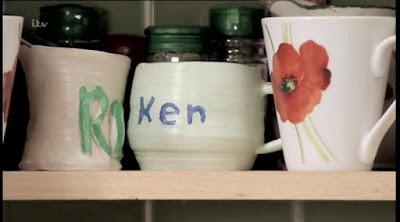 Deirdre's legacy: Loved that Ken used one of her homemade mugs for his cuppa.

Musical ambiance: Superstition playing on the jukebox when David and Jason were talking about Callum.

Compensation award: Carla admitted her gambling is an attempt at making herself feel better.

Exclusivity award: Someone should tell Liz she's allowed to have had more than one best friend at a time. Eileen's going to feel perennially the second best in both meanings of the phrase!

Reincarnation award: Yep, I do think Amy is her great-grandmother's daughter.

Meow award: Bev was pretty catty about Audrey possibly hitting on Ken eventually, but there's history between Bev and Audrey over Fred, remember.

Blast from the past award: Emily wins. In the course of talking about Ken's women, from exotic dancers (Rita) to librarians, she certainly had Rita shuffling uncomfortably in her seat. Lots of history brought up and a near miss between Bev and Audrey. Lovely. 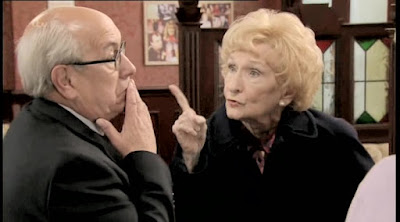 Lines of the week:
Bev "That's the down side to being lovely. People queue up to say so" (Oh, isn't that nicely put?)
Tracy "Whatever I did, I knew I could turn to her" (but you never stopped doing things)
Deirdre's letter "So when I head off to the big Pottery Class In The Sky, I want you all to push the boat out" (pottery right to the end! Brilliant!)
Amy on accessorizing "I don't want to go the full Lady Gaga, just some nice glitz"
Ken to Tracy "If selfishness was an Olympic sport, you’d be stood on a podium every four years waving your gold medal at the crowd."
Audrey "If Deirdre was going to haunt Ken I think she'd think of something a little more menacing than a stuffed marrow" (Oh, I don't know. It generally had that effect, didn't it?)
Norris "I know the music I want playing at my funeral" Eileen "Awww what is it? Send in the Clowns?"
Norris about Deirdre and Ken "They were on and off more times than the light in Beth Tinker's fridge"
Rita "It was touch and go with Mike Baldwin for a time. I'm not sure he ever really got over her" (I've been saying that for years)
Liz "To our friend. Deirdre!" 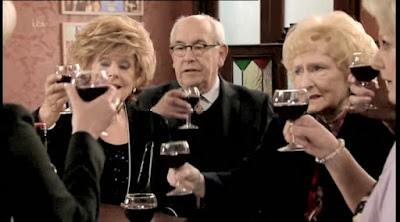