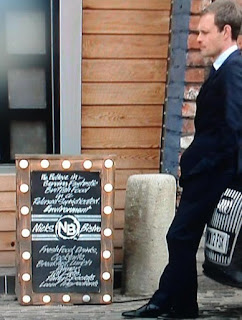 I do love a nice bit of coincidence.  I spotted that Nick's Bistro had a new sign last week on Coronation Street. It's a sign that sits outside of the Bistro, surrounded by lights ... and it looked rather familiar to me.

The reason it looked familiar is that my friends Martyn and Stephen who run the award-winning Eat Me Cafe in Scarborough recently got themselves a new sign too. 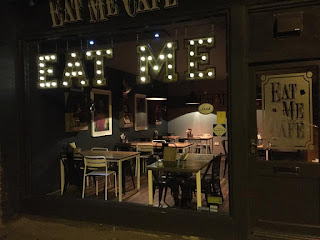 I joked to them on twitter when I saw the new Nick's Bistro sign and asked if Nick'd nicked it from their cafe.  Well, the coincidence is that the same company has created the sign for Corrie to use in Nick's Bistro, and the Eat Me Cafe sign.

Worth a mention then is the manufacturer of these amazing signs - Lamplight Design Co.  Their details are as below.

And it looks like we'll be seeing more of their work in Nick's Bistro, according to their tweet, below: