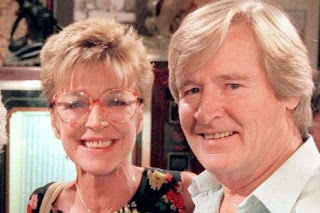 With the sad news that Deirdre's final farewell will be on the show next week, here's an interview with William Roache, who plays Ken Barlow in Coronation Street.

With Deirdre heading back to the Street, Ken’s planning a surprise party – how’s he feeling about her return?
Ken is thrilled to bits that she’s coming back, he’s really excited and he’s got this surprise 60th birthday party all arranged to celebrate. Then of course there’s this big shock, when their friend Bev arrives to announce the tragic news that Deirdre has passed away.

How does Ken react? Is he initially in shock?
When something really big happens, you don’t do anything. You are dumbstruck, literally - bang. If it’s something as awful as that, you don’t scream, you don’t shout, you don’t cry, you are just literally struck dumb. So that’s how I played it. Then there are some lovely scenes with Bev where it unfolds and she talks about how Deirdre died, which was was very peacefully, so that’s a blessing for Ken. Then of course it moves into a phase where Ken can’t understand why she stayed away so long. The funeral is coloured by what Bev tells him about why Deirdre stayed away so long, which he thought was himself. He thought she’d gone off him, found another man, or something like that. But it turns out the reason she stayed away was because of Tracy’s awful behaviour, she was so embarrassed about Tracy having the affair with Tony and upsetting her best friend Liz.

Does that make Ken angry with Tracy?
When he hears the real reason she stayed away he gets very angry, because he has been deprived of the last few weeks and months of life with the person he loves, Deirdre, all because Tracy misbehaved. So he has this double emotion to deal with, tremendous grief at the loss of Deirdre, and colossal anger at Tracy. The denying him those last few weeks. So all through the funeral, he’s got this mixed feeling, anger at Tracy and grief at having lost Deirdre, and also the added grief at not having been with her at the end in the last few weeks of her life. So it gives it another dimension at the funeral.

Does Ken break down at any point?
Ken isn’t the sort of person who shows his emotions. For most of it, he’s on the verge of tears but he’s just keeping it under the surface. However then there comes a point where he’s given her glasses. As an actor Ken is given the glasses of Deirdre, which is highly emotive as glasses are very personal, they’re very close to the person, but of course when I got the glasses, they were also Anne’s. Anne had worn those glasses for twenty years, so there was a complete merger for me, there was no Bill and Ken and Deirdre and Anne, it was just one. I felt the loss of both. From an acting point of view it made it totally simple and totally believable and very easy to play. From the grieving and sadness point of view, it made it totally real. It was the only time there is a blurring of the edges between the character and the actor - it was just one, it became complete oneness, which is interesting and helpful.

When you played the scenes after the funeral around the Barlows table with Peter and Tracy there was a lot of emotion, was it confusing at times?
I just dropped the confusion and I found instead of trying to think of it, and think of the confusion, let it be, and let it be one. And it was one. It was the only time, ever, that you could say that Ken and Bill are the same: that was the moment that it was so. It was really, really interesting from that point of view.

Was it nice to have Chris Gascoyne back filming and to do those scenes going over the Barlows’ troubled history with Chris and Kate?
It was wonderful to have Chris back. I love Chris dearly, he’s such a good actor, and such a beautiful person. There was a lot of sad, but sort of joyful moments, heart-warming moments that have come out of those scenes and from having Chris back. I think, from Annie’s point of view, she’s had a wonderful send off, both as a person in the memorial service, and from the story that plays out on screen. Everybody loves Annie, they really did, and the stories show and respect that. It was good to play.

After the funeral there are some classic Barlow scenes where everyone’s rowing – can you tell us a bit about what happens?
Well, it is classic Barlow really, nothing ever goes smoothly and the funeral is no exception. So really Ken has three things going on, which is quite tricky; he’s got the grief of losing Deirdre, the anger at Tracy, and then his son Peter doesn’t turn up when he’s meant to be a pallbearer. So poor old Ken’s trying to think of his eulogy and he’s got all those mixed feelings going on. But that’s good; it’s good writing and a good story, it gives it a three-dimensional aspect.

The row leads to a lot of conversations about the past and Deirdre. Are the issues resolved between them by the end? Are the Barlows almost brought back together by their grief?
It’s very interesting and it’s what is great about the Street itself. It goes back so far, it draws on its own history. So when we have a row, it isn’t a row just about the situation, you draw on all that’s gone on in the past. Ken has always got at Tracy for her behaviour, quite rightly, and so that all comes out. He really goes at her; how she never listens, she never cares, brought her misfortunes on her own head, and I say awful things to her in the church. Deirdre spent a lot of time trying to excuse Tracy’s behaviour, which was inexcusable, so it causes a lot of grief for her and that makes Ken very angry. It was an exploration that went into the relationships between Ken, Peter and Tracy, and Peter and Tracy as well. Whether it’s sorted by the end and they can accept that nobody’s perfect you’ll have to wait and see. Ken hasn’t behaved well, Peter hasn’t behaved well, Tracy hasn’t behaved well. So at the end of it hopefully they can come out more cleansed, as it were, maybe clear the air a bit.

How do you think Ken and Tracy are going to get on living together?
Deirdre was always in the middle sorting them out. She was always the only one who defended Tracy totally. Ken would go at her, but Deirdre defended her. At the moment there’s peace, probably Ken and Tracy are closer than they’ve ever been, for the time being anyway [laughs]. For how long that will be, I don’t know.

On top of this, Tracy’s ex husband Robert arrives. Is Ken aware he’s present at the funeral?
I don’t know if Ken’s aware of that at the funeral, but he certainly comes home, and he’s there. He comes home after the funeral to find Tracy and Robert on the sofa - ‘cavorting’ is the word he uses - which is not really appropriate on the day of his wife’s funeral. He’s very cross, he tells Robert to get out and he doesn’t want to see him again, so it’s not a good start for Robert.

What were his feelings about Robert in the past? Did Ken like him?
Ken didn’t know much about Robert because Tracy was living away when it all happened. I don’t think Ken had any particular feelings about Robert from the past, but seeing him in his living room when he comes home from his wife’s funeral, cavorting on the sofa with Tracy, that is not on. So Robert does not get off on the right foot.

Can you give us a hint about what’s coming up for the Barlows?
There’s lots more exciting things coming up for the Barlows. We’ve got Robert turning up chasing Tracy, then we’ve also got Simon misbehaving. Simon’s not very happy when his Dad comes and then goes again. Simon’s showing signs of his troubled upbringing, it’s not surprising, any child brought into the Barlow household is bound to suffer some deep psychological scarring! I think it’s good that they’re showing he’s got some scarring, because you can’t come through what he has unscathed. He’s lost his mother, he’s seen his father drunk, he’s been through so much, it’s bound to have an effect. I think it’s very good that we’re exploring that. Then there’s also little Amy, on the other hand, who is coming out as quite a little tough character. She’s becoming a mini-Blanche, which I think is great too, because that strength would mean it’s her way of dealing with all the awful things that have happened. It’s good stuff.

Do you enjoy working with the youngsters who play Simon and Amy?
They’re both brilliant. They’re so sweet. They come up after scenes and say ‘Well done’ and give you a hug. Alex is a dear little lad, and little Ellie, she’s wonderful.