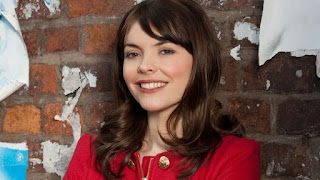 How does Tracy feel when she spots her ex-husband in the crowd at Deirdre’s funeral? When did she last see Robert?
Tracy’s really struggling on the day of the funeral. She’s in bits over her mum and also struggling with guilt over the fire, but Ken’s still being really cold and she’s only just holding it together. So when Tracy spots Robert she’s shocked but overwhelmed to see a familiar face and loves that he is there to support and care for her.

What makes her kiss him?
Tracy can’t face the wake and heads home alone but when Robert knocks at the door she admits she could do with some company. He makes her some food and Tracy’s really touched by how caring he is. He says all the right things and he’s there when she desperately needs some comfort.

What does Ken make of Robert’s surprise arrival?
Ken is furious to find Tracy kissing Robert on the day of the funeral. They’re in his house and that’s not what Ken expected to see when he got home. He shouts at Robert to get out, he thinks Tracy’s sunk lower than ever but she just wanted to blot out the pain.

How does Tracy feel about Peter’s arrival – is she pleased to see him?
Peter arrives while Tracy’s in the midst of a massive row with Ken. Yes she’s pleased to see him but his timing is not great. She’s angry with Ken, she’s so angry that Peter missed the funeral and she just erupts. They all give each other a few home truths.

Was it emotional filming the Barlows scenes where they go over their family history?
Yes it felt really sad. It still feels like Annie is here with us.

Do you think Tracy sees Robert as a means of filling the void left by her ex Rob or is their real feeling there?
Robert’s there when she needs someone, he’s saying all the right things and she likes that he likes her so much, even after all this time apart. I think she also likes the fact that he’s completely detached from all of the drama she’s had over the past couple of years.

Does Tracy have any suspicions about Robert’s motives?
No, she is very confident in herself in that way.

Ken’s concerned that Tracy might be burying her grief for her mum – is this the case?
Yes I think so to a certain extent. Tracy loved her mum more than anyone else in the world and without Deirdre’s constant, unwavering support, her life is going to be very different. I think Robert is the only other person who has ever truly loved Tracy for what she is, warts and all, so she’s throwing herself back into that relationship.

Do you see Deirdre’s death as a turning point for Tracy?
We will see. Some of what Peter says strikes a chord with her, she does love her daughter and she’s determined to make some changes.

Can you see a happy-ever-after for her and Robert?
Probably not if history is anything to go by!