Who owns the Rovers Return? 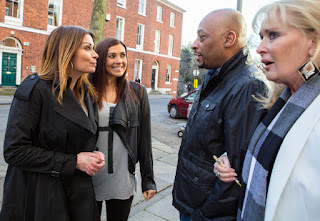 Last night on Coronation Street when Steve McDonald return from Spain, he railed at the thought of Tony owning half of the Rovers.  As well he might.

What he didn't rail against, and what no-one seemed to mention, is that Carla owns the other half.  I put this thought out on twitter last night and one of our other bloggers replied to say that he thought Carla hadn't bought it.  In our house, we were convinced that she did.

I do remember most definitely Carla and Michelle turning up at the last minute to stop Travis Ltd (Tony) from buying the remaining 50% of the pub, as in the picture above. And Carla offered to buy the 50% to keep Liz and Michelle in a job.  That's why, when Tracy found out that Carla had bought into the Rovers she was so incensed she broke into Carla's flat with Michelle's keys intent on killing Carla for knocking her and Tony's plan on the head to buy the Rovers outright.

So does anyone have proof of what actually happened? Did Travis Ltd (Tony) buy 50% and did Carla buy the other 50%? If so, this leaves Steve and Liz not owning the pub at all, just running it. Someone needs to tell Steve!

Can anyone clarify for sure with episode details? It looks like it was Friday May 22 and Monday May 25.  On the clip at the Radio Times website here - it shows Carla stepping with her offer to buy half of the pub. But did she make good on her offer?

If you view the clip below from 1.35 onwards, Steve clearly tells Tracy "Carla's bought into the pub."  But was all of this before Liz found out about Tony and then it wasn't necessary for Carla to buy into the pub after all?

You raise an excellent point! Tony definitely owns the first 50% percent that he bought under the ruse of Travis industries. I'm pretty sure that the sale went through to Carla prior to them learning of Tonys ruse.