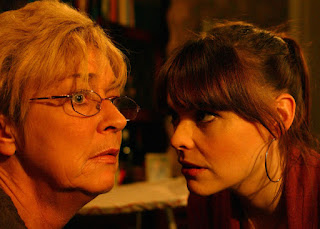 With the sad news that Deirdre's final farewell will be on the show next week, here's an interview with Kate Ford, who plays Tracy Barlow in Coronation Street.
How does Tracy take the news about her mum’s death?
Tracy is devastated, she loved Deirdre very much. Over the years, whatever Tracy has done, even if she hasn’t agreed with it, Deirdre has always stood by her and loved her unconditionally. Tracy suddenly feels very alone without her mum.

How is Tracy feeling about her mum’s funeral?
Tracy throws herself into the funeral arrangements, she tries to be very efficient and busy herself with the plans in a bid to block out the pain.

Was it hard to film the scenes of Deirdre’s funeral, given you worked so closely with Anne?
Yes it was very difficult, and emotional at times, but I tried to keep things as separate as I could because it was too painful if not.

Obviously Tracy’s been up to her usual devious tricks of late – does losing her mum make her reflect on her actions and her lifestyle at all?
I think it does, she wants to be a better daughter and a better mother. She does set about making some changes, and maybe trying to call a truce with a certain person, but whether that will last I don’t know.

How does Tracy feel about her dad Ken’s hostility towards her?
She’s angry with him and she doesn’t really understand why he’s being like this. Tracy is mourning the loss of Deirdre too and she really needs some comfort but Ken isn’t forthcoming at all.

For once, does Tracy actually feel guilty when Ken berates her for causing Deirdre so much grief over the years?
Yes she does feel guilty and she vows not to let her mum down again.