T is for Trouble 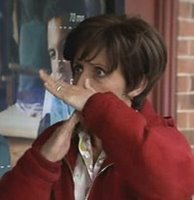 (This post was originally posted by Sunny Jim on the Coronation Street Blog in June 2015.)


Just as the Grimshaw clan were finding out quite how awful their younger son was last night, I saw this tweet from @MellyPhil and it got me thinking about the number of baddies we've seen on Coronation Street over the years whose name starts with the letter 'T'. Is there any semblance of nominative determinism?

As Melanie points out, we've got Tracy Barlow, Todd Grimshaw and Tony Stewart currently at the top of the troublemakers list but if we look back there have been quite a few similar terrors in the past.

Topping the charts has to be the ever terrible Terry Duckworth. Selling his son to his dead wife's parents; selling his mother a death trap of a car which ultimately killed Judy Mallett; GBH; absconding from jail; breaking into the corner shop while drunk; running away with his friend's wife; and trying to open a lap dancing club on the Street. Just some of Terry's despicable deeds.

Tony Gordon wreaked havoc during his short time on the Street. Making Jed Stone homeless; killing his love rival Liam Connor; pushing Roy Cropper in the canal; and then finally shooting Robbie Stone and setting fire to the factory. All these and more won accolades for 'Bad Boy' and 'Villain of the Year' in various 2009 soap awards.

No list of Coronation Street baddies could be complete without Tanya Pooley. The bitter barmaid wrecked relationships and played terrible tricks on her co-worker Raquel Wolstenhulme, like setting her up on a fake modelling assignment. She eventually stole Bet Lynch's trucker boyfriend Charlie Whelan and left the Street.

Trevor Ogden got off to a bad start by burgling houses on the Street while the residents were holed-up in the Mission Hall because of an unexploded bomb. He ran off to London with the booty and was rarely seen again, only making occasional visits to see his doting mother Hilda and father Stan.

Other also-rans include: Theresa Morton who would never win mother of the year; Tina Shapiro who was Jez Quigley's girlfriend; and Tony Horrocks, who wasn't exactly bad but ended up owing money to drug dealers which ultimately brought about his death.

But let's look at he other side of the coin. Tyrone Dobbs, Tina McIntyre, Tim Metcalfe, Tommy Duckworth, Tommy Harris, and Toyah Battersby have been pretty well behaved over the years so I don't think that the letter 'T' bodes ill for a character but it was interesting finding out.

Email ThisBlogThis!Share to TwitterShare to FacebookShare to Pinterest
Labels: heros and villains