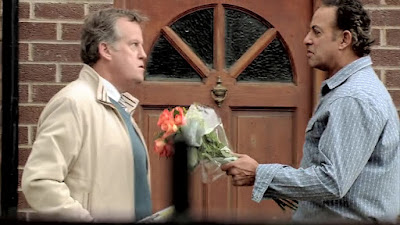 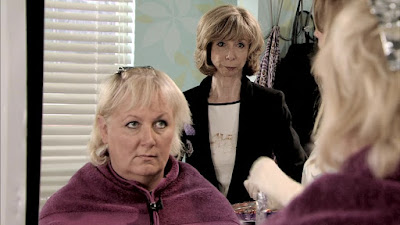 Presumptuous award: Brian. Rent book? Really? I think Amy might have something to say about that since he's borrowing her bedroom.

History rewrite: Nick says he always wanted kids but has he forgotten Natasha? Well, he did come around after a bit but by then she lost the baby and pretended she hadn't.

Spoiled Rotten award: Steve takes the dog for a carry, not a walk.

Fool for Love award: Dev. And not for the first time. Now he's lost them both. 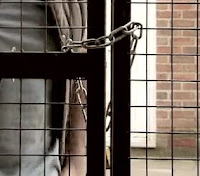 Home truths award: Julie laid it all out on the table for Dev, and it wasn't the Peri Peri chicken. You tell him, sister!

Dexterity award: Liz and Michelle were able to relock (and presumably unlock again) the padlock through the small openings of the gate.

Badger, badger, badger award: Brian wasn't going to let up the pressure until he talked Julie round. And he did, kind of. In any case, they left together. Reunited? Time will tell but probably.

Continuity fail award: Why did Sean give Julie flowers meant for Sinead except the hospital didn't allow them? Sinead's been home from the hospital for weeks and weeks.

Lines of the week:
Tracy to Amy "Write down 'mutton dressed as lamb'. Tell them your Grandma Liz gave it to you"
Eileen to Michael about Gail "If you don't go over there and give her a hug, I might have to and believe me, that's not something I want to go through again"
Gail about Michael "He's a failed burglar, with a dodgy heart and a fondness for Y-fronts."
Todd about Eileen's kiss with Michael "I know you're desperate, but that's practically grave robbing."
Julie "The partner could be wearing a sandwich board with 'I don't love you anymore' and the penny still wouldn't drop" (Um..."
Brian about Dev "I've seen his sort. Hair oil and shopworn charm" (that's Dev to a tee!)
Eileen "You are going to let me walk away while I still have my dignity and you still have your teeth!"
Dan "I'm a bad loser. Especially to a woman" (Alarm bells are going off)
Eileen to Michael "You married Gail! That makes you persona non-starter in my house" (you say that *now*)
Eileen "Just stick that in your pipe and Tweet it"
Steve "A rapid change of subject. What am I missing?"
Erica "If there was a nuclear war, I'd be the last thing standing. Me and the cockroaches"

Has Nick also forgotten how he bullied Leanne into having a
termination after they ran off to Scotland to get married
at 16?

And as WE all know "mutton dressed as lamb" is a simile, not a metaphor ;)

They're also playing Pick Up The Pieces a lot ;)