State of the Street - June 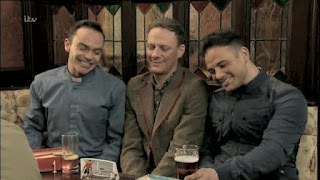 June on Coronation Street was fairly downbeat overall. There was the aftermath of Kal's death as it affected Alya in particular. Sophie and her family barely had a chance to catch their breath after Maddie's death when they had to deal with Jenny running off with Jack. Faye finally made Anna listen and gave baby Miley to her father and family to raise.

The cracks are starting to show in Simon, after a lifetime of losing people he loves. I fear he's going to make David Platt look like Father Christmas before Simon's even old enough to vote!

Michael has found out about G'Andy and has spent the month dealing with anger and grief, with Gail looking on from across the street in equal measures of hope and desperation.

Kylie's back and Callum's butt is about to be kicked. I hope. Dev's just a romantic fool, "fool" being the operative word. Again.

All this and more detail on The State of the Street.