The people paying respects to Deirdre seem to be a steady stream, as you would expect. Tracy's really throwing herself into funeral arrangements, selflessly for a change. But Ken has questions that only Bev can answer, mainly, why did Deirdre stay away so long? Bev finally admitted it was Tracy's recent behaviour, what she and Tony did to Liz. Now Ken is angry. So very angry. Tracy's loving attitude towards her dead mother is only making him boil more and more.

Tracy found a letter that Deirdre wrote about what she wanted at her funeral and that ended all discussion. I absolutely love that that they had Deirdre's letter to mention pottery.

Interesting how Tracy was uncomfortable with Yasmeen's grief. Wouldn't it be nice if she actually did the right thing and confessed it was her that left the candle burning? probably won't happen. I did enjoy Tracy teasing Ken about finding letters to Deirdre from Mike Baldwin!

We come to the day of the funeral. 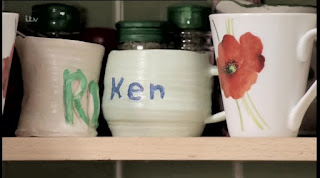 Awww, Deirdre's wonky homemade mugs were in the cupboard and Ken used one of those for his morning tea. Lovely. And wasn't Amy sweet? She's right, she doesn't get that from her mother. But she was funny and Eileen reckoned she takes after Blanche. I think they really are making Amy into a bit of a mini-Blanche and it's wonderful! I choked up again when Eileen and Liz were talking about Deirdre, laughing and missing her. True friends. I remember one drinking session when they made fun of Deirdre's belts!

The neighbours were all very kind to Ken, especially Dev who knows what Ken is going through. Bev was catty towards Audrey, implying she'd be after Ken, wasn't she? Lot of history there, though. Ken was angry that Peter wasn't there. they knew he was traveling by train, wouldn't they assume it could be delays? Carla didn't make it to the funeral, either.

Liz stepped in as pallbearer in Peter's absence. Very touching. I had a lump in my throat pretty much the whole funeral. I can't imagine trying to sing at a funeral of someone I was so close to. Blanche's One O'Clock club even came to pay their respects and weren't they happy to see Kevin! 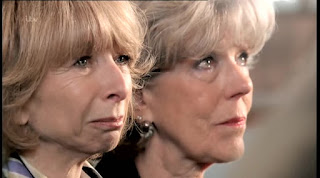 Tracy is really mystified at Ken's coldness towards her and so were his friends. He erupted at the funeral and since Tracy didn't know the real reason why, it really cut her to the core. The man that she recognized on the street came out to see her in the church yard. It's her ex husband, Robert. Good moment, introducing one ex to the other. Steve got her back inside in time for Ken's eulogy. I'm off in floods of tears again. Watching the actors in the church, knowing they're all thinking of Anne Kirkbride. So was I. Lovely touch with the applause. I think it was an ovation for Annie as well as Deirdre.

The wake was quiet, as they often are. Gail was more fussed about Michael and obsessed about him the whole time. He didn't really have much time for her so Gail finally gave up. No wonder Audrey wanted to escape. Simon was rude. Eileen discovered she was now Liz's best friend. Hey, you know you can have more than one best friend, right? The One O'Clock club made quick work of the buffet but were shamed into sharing with Amy after she came over all Blanche on them. Liz was kind enough about Tracy even in the circumstances. It was enough to make Ken think. But it didn't last.

When last we saw Tracy's ex husband, Robert, he was living in London. Looks like he must have moved back to Manchester or came back for the funeral. He came back to support her and he cooked for her. She can't understand why he's being so nice to her after what she did to him, cheating and lying and he's now telling her he never got over her. What does Tracy do, hours after burying her mother? Move in for a snog. She did the same thing when Rob was sentenced, Tony was the one at hand that night. Robert tried to resist and then Ken came in and was horrified.

Ken finally laid it into Tracy and Tracy figured if she was going to wear some of the blame, so would Ken and so would Peter when he finally arrived, victim of a massive train fail. There were a lot of home truths and Tracy started them off. She dragged his dirty deeds up and Peter implied a few of Deirdre's. Ken finally retreated after Mike Baldwin was brought up though listened a bit at the top of the stairs but Peter continued to have a go. Tracy isn't backing down, though. She's determined to share the blame, they all gave Deirdre grief and so they did. 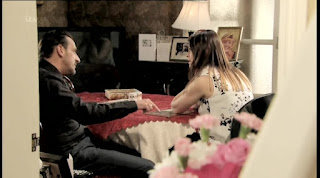 Peter threw a few home truths. Tracy needs to sort herself out for Amy's sake. He would know. He's made a lot of mistakes with Simon, too. I think he struck a nerve. Even Ken has backed down a bit. Maybe getting it out, got rid of it. Tracy promises to change. Nobody believes it. They settled down to telling stories about Deirdre, with her photo looking on behind.

At the end of the day, it was just Ken, and Deirdre's photo. Good night.

Meanwhile, in the pub, friends talked and told stories about Ken and Deirdre both, with Emily alluding to the fact that Rita was an exotic dancer and one of Ken's conquests, though only the two of them knew what she was talking about. Lovely little touch, that! Lots of history about both characters and a few more besides. The old rivalry between Bev and Audrey is still there with another clear the air in the ladies' between them. She assured Bev that Fred loved her and died loving her. They patched things up for Deirdre's sake. 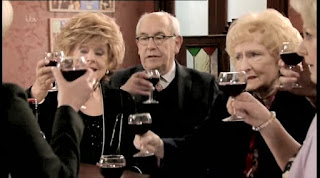 Dan is still lurking around and Liz has noticed tension between he and Leanne. He lies his way out of it. The best of Deirdre's friends were the last to leave, with a final toast of a bold Shiraz. You don't often see Emily sozzled and she was wonderful! Liz spoke a lovely tribute to Deirdre, and, I think, Anne K. as well.

David really doesn't want Kylie to be the bait to set up Callum but she's not afraid of him and she is the only one that really knows him well enough to do it. Staging a fight in front of Callum. It's so obvious. Even Jason knows Callum's just using Sarah and Callum knows Jason knows. Part two is Kylie pretending to leave David, but Sarah is unavailable so it delayed David's arrival to rescue Kylie. Will Kylie be able to hold Callum off until they get to the pub? Can't blame her not wanting to have a go in a grubby back room when he's got a really nice flat waiting.

But her delay got Callum angry. It got dangerous and Callum took it out on Kylie but luckily the cavalry arrived in time. The only problem is, the plan didn't work and Sarah's still under Callum's wing and influence. Callum might use that in court, too. If only there was a way of making sure there's hard evidence that he's still dealing.

It was very jarring, jumping into this storyline during Deirdre's funeral episode. Sarah certainly does have her hands full with Bethany. Callum invited Sarah to a house party and Bethany wagged off school instead and showed up at the Dog and Gun. She proceeded to drink. Callum didn't let her go to the party, she'd done enough of that already. Bethany is trying to blackmail Callum to paying for her school trip, next.

Carla appears to be into a web of gambling, clearly as a result of trying to soothe her guilt. Online gambling makes it so easy, too. Another in person poker game and this time, the only proper competition is Erica. Lloyd and Nick were a bit weak. Carla did pretty well but Erica did better. Erica sure carries a lot of cash around, though. Roy was not very happy to find them gambling in his cafe. Carla's back at the casino and they know her well there. That's not good. She must have lost, as we heard her transfer a lot of money to her bank account. That's not good, either. She also couldn't face the funeral. Wonder where she went? Three guesses and the first two probably don't count.

Cathy is making small steps and has uncovered the chairs. But she hasn't actually thrown anything out, she's just shifted it. At least she's forcing Roy to take his driving test again. They went to the Bistro for a drink and she had a coupon for a free drink. Expired in March 2012. It was called Nick's at that time but it doesn't seem like Cathy was familiar with it before now. How did she get the voucher?

Liz has met Dan's daughter, Lucy. Liz is noticing Leanne's coldness towards Dan, though. She looks to be a teenager, going by her wanting his permission to go on holiday. Liz confronted Eileen, is she starting to have feelings about Michael? Who couldn't see that coming? Sarah's got to be one of the worst barmaids The Rovers has ever had. She spends more time cuddling up to Callum when he's around or running off on a crisis than actually working. She'd be cruising pretty close to being sacked if Liz wasn't so distracted by Deirdre's death.