Another taxi, another departure 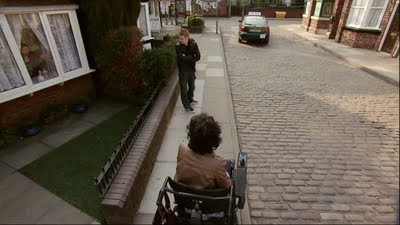 And so it goes. This time, a Streetcars cab rather than a black cab but the end result is the same. Eddie's gone and leaving us all bereft.

I've just finished watching tonight's episodes and I have to say, I was more upset watching Anna and Eddie split up than I expected. Watching them, watching Gary's upset and Anna's and Eddie's tears, I could feel a suspicious dampness in my eye region myself and was really sorry to see him ride away in the cab. As sad as I was to see Liz go, I wasn't swallowing hard. That's probably because Bev Callard has been absent more than she'd been on screen over the past year or two and her return and leaving storyline was kind of naff really.

Eddie's leaving storyline was also somewhat abbreviated but it made more sense. He only went along with the adoption for Anna's sake, not really expecting it to happen and got backed into a corner when it did. Because Faye was not an easy child to settle in, he found it overwhelming. He had the chance at a fresh start but Anna wouldn't go with him and that was it. She loves him but not enough to marry him, something he's wanted for awhile but only started asking her after it was too late. She's found the courage to be alone where she never had it before.

It's a very sad breakup because you know they both still love each other but want very different things out of life as they approach middle age. As others have said, Steve Huison turned Eddie from a stereotype ignoramus into an ignormamus we all adore, one with layers and a big heart under all that hair and string vest. We'll all miss him here at Blog Towers and wish Steve the best of luck.

Keep in touch with @SteveHuison on Twitter. If you pass him on the street, remember, he looks like this now.
Posted by Tvor at 20:31