Death by their own hand 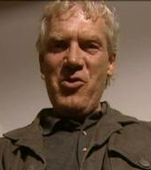 This isn't a spoiler but there were rumours of a possible suicide of John Stape, I wondered if there have actually been any successful suicides on Coronation Street? There are a handful that I can remember but they are few and far between. Soaps tend not to feature successful suicides so as not to be blamed for a fan doing the same. Thus, most people on soaps, Corrie included, who attempt to take their own lives are usually either saved at the last minute or are unsuccessful and are revived with medical attention.

The first Corrie character to die at his own hand was Joe Donelli. He killed Steve Tanner, a murder that Len Fairclough was suspected of committing. Joe had run off but returned a year or so later and held Minnie Caldwell hostage. Stan changed places with him but couldn't prevent him from turning the gun on himself. We only heard the shot from the outside of the house.

Janet Barlow was Ken Barlow's second wife. They had a stormy marraige and separated in 1976. In early 1977, she returned and wanted a reconciliation but Ken rejected her. He found her in the morning, dead, having taken sleeping pills.

Don Brennan, who had terminal cancer, tried to get revenge on Mike Baldwin but in the end, drove Alma's little red sports car into the viaduct at the end of the street back in 1997. He died in the resulting fireball. The scorch marks were on those bricks for years until the Joinery was built last year and then all the bricks came down with the tram crash.

Katy Harris killed her father in a fit of rage. Her mother took the blame for it and Katy, a diabetic, overdosed herself on sugar, the guilt she felt having been too much for her.

Tony Gordon allowed himself to be consumed by the fire in the factory rather than be taken by the police.

And lastly, Natasha and Roy Cropper both took a handful of pills while in despair. Natasha was broken hearted by Nick's discovery about her abortion and subsequent lie that she was still pregnant and Roy was facing ruin with Tracy's lies about being pregnant by him and Hayley's apparent defection. Both were rescued in time.

Those are the only ones I can remember but maybe you can think of anyone else? Some characters, such as Sheila Birtles, Ken Barlow, Les Battersby and Bet Lynch have thought about it but were saved by a friendly face and encouraging word. David Platt drove his car into the canal but was only trying to ruin Sarah's wedding.

Thanks to Corrie.net who list over 120 characters (minor and major) and 2 animals that have died since the start of the Street.
Posted by Tvor at 09:23

Kevins secound wife stepped in front of a semi. after losing baby Jake

What about Richard Hillman?

Right. Hillman as well. he was going to take the whole family down with hiM!