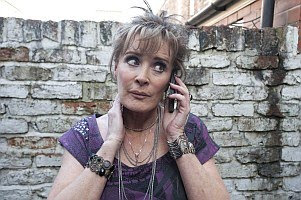 Jim's bank robbery plans go pear shaped. He lands back in jail and Liz is devastated. She promises to wait for him but she's lying. Liz makes a life changing decision. How is this going to affect Steve and Becky's plans? What will happen when Tracy finds out Steve was going to take Amy away?

David and Kylie might be married, but Gail decides to tells a big secret. Maria cracks under pressure and Carla sides with Frank who buys into Underworld. Maria takes it badly and considers going to the police over what Frank did.

Anna and Eddie continue to have problems adjusting as does Faye. Eddie has a question for Anna and he gets a new job offer but it means moving away. What's her answer, is Anna prepared to go with him? Katy has news for Chesney. Tommy moves in with Tyrone. Sylvia moves in with Roy and Hayley.

Kevin tries to delay the hearing about the money. Sally is shocked at the judge's decision. What's Kevin's next move to try to win her back? John decides to stop his medication against advice but when the police come calling, he breaks and flees.

Sean heads to London to visit Dylan and runs into an old flame. Meanwhile, Todd visits Weatherfield with a new flame and it doesn't go as expected.


For more detail and photos, see the Moosejaw Mercury at Corrie.net
Posted by Tvor at 14:50