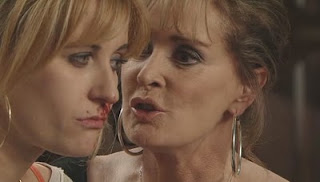 I really, REALLY don't believe Liz wouldn't have been kept up to speed on the goings on in Weatherfield while she was away. I think she knew about the Tram Crash but that was it. It makes absolutely no sense that even if Steve hadn't contacted her about  Tracy coming back that her best made Deirdre wouldn't have. Especially when Deirdre was so chuffed that Tracy was home for Christmas and then, later, nearly dying in an assault perpetrated by Claire. She didn't say a word to her best friend? Not on your nellie!

As ticked off as Liz is by all the goings on that she didn't know about, she really doesn't have much room to moan about Tracy working at "her" pub. Where has she been for months? She was also surprised that Sunita was cool with her but nobody would have told her about that, for sure. 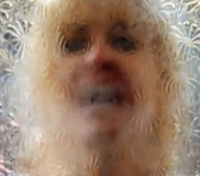 So she digs and digs. And she pokes Becky with a big stick and a lot of it was totally uncalled for and then is surprised when she kicks off and Steve barely stood up for Becky. I know he doesn't really feel a lot of loyalty to her at the moment and had stood by her a lot more than most men would have, but he also shouldn't let his mother continuously insult his wife, either.

Liz is understandably angry but making digs about how sloppily the pub was run? Then she shouldn't have stayed away so long. And didn't Becky kick off and aimed most of it at Kylie who gave as good as she got. And i'm sorry to say i laughed out loud when she was tossing David around the room like a fly and then whacked him across the chops.


And I cheered when she tossed Liz out of the pub, her standing there bleeding all over the bar. I know Liz has a right to be angry but she had that coming just the same. She blows off steam to Eileen who did a very good job of staying fairly neutral though I think leaned slightly to Steve and Becky's side but Steve... I think he should have told Liz to behave a bit better to Becky as well as the other way around. Well, Becky got the last word, even if it might not be the upper hand. Tossing all Liz's unmentionables in a puddle was wonderful! 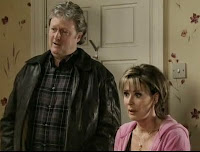 Ah but there's Jim and "What about ye, Elizabeth?" I love the chemistry between the two of them!  And she made a remark to Jim about something happening in Spain. What the heck was that? I couldn't even conceive of something so contrived, just to get Jim back or whatever it was. He knew Owen was with Liz and then she left for Spain. Did he follow her there to tell tales on Owen for allegedly having him beaten up? Possibly because she knew Owen was responsible for Jim's assault. Allegedly.  None of this makes sense. I"m glad to see Jim back, though. This all should have happened back way before the tram crash but Bev Callard seems to have needed yet another leave of absence. Unexplained, this time.

But I digress. Jim has suggested Liz buy the pub herself. With what? Beg borrow or steal. Phrase of doom? But even a meeting with the Brewery man, Richard Wilmore wasn't too productive. That's the guy that Jim thumped in a jealous rage in the early 90s if you will recall, when they had The Queens pub. Now Jim and Liz want the brewery to buy back the pub and put Liz back as manager. Good idea but no dice.


Now. i can't stand Tracy but all this palaver over her taking Amy back? I think Steve only had her because Tracy was in prison. Tracy had the main custody of Amy before that. I don't think Steve ever legally changed it over did he? And i don't know why Maria should be so concerned for Tracy's safety with Frank. She's well able to take care of herself. Meanwhile Carla is well and truly pissed off at her for running to Tracy about Frank and the business is going to suffer as a result. Maria ended up having to apologize, but it was a pretty lame one as far as apologies go. And even though Gail put a bit of poison in Frank's ear, too, it looks like Tracy is willing to forget the accusation of rape if Frank is willing to overlook her murder rap. Meanwhile Frank is urging Carla to go out of town. Does he have nefarious plans in mind?

I wonder if Sally and Kevin have learned their lesson. Sally did include Kevin with the family and then Kevin leaned in for a snog.  I think Sally over reacted though, accusing Kevin of using the situation to worm his way back in when it was her that insisted he stay and her that collapsed in tears on his shoulder. But Kevin isn't backwards in coming forwards and give Kevin an inch, he'll take the whole bike shed. They've got to stop drinking red wine! Rosie seemed awfully doting of the baby all of a sudden when a few weeks ago she barely gave him any notice and didn't even recognize him when she had to take him home.

At least Kevin has seen sense to take the house off the market and Sally's knickers are down again seeing as Jeff has stayed over. Which of course has put Kevin into a churlish fit. He and Steve both bought scratch cards, something we've never EVER seen them buy before. And guess what? Kevin wins and the card he bought would have gone to Steve who asked for them first.  Will he share? Will he heck, but then Steve wouldn't have shared either! He wasn't even going to tell Sally until she signed on the dotted line  or said she'd give him another chance, which she won't, but Tyrone put the brakes on that. It was a laugh though, seeing Team Sally and Team Kevin in the pub, glaring across the room, reigning in support for their sides and Rosie looked a bit iffy, with Pound signs flashing in her eyes. 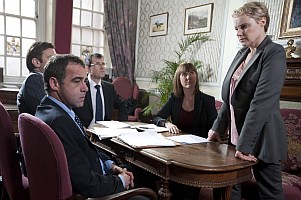 Sally's going to go for half! Do you think she should get it? I think he should at least put some in trust for the girls. Instead, he's making it a condition of a reconciliation. Would Sally have gone back to him if she'd known? Nah. But he's on a mission, buying her flowers and trying everything he can to woo her back.

Get the feeling that Katy is looking for a way to escape her father by wanting to move in with Chesney and have a baby? Janice moved out of her flat and in with Julie with her bags of clothes. She didn't take the furniture so how come it's not still there for Katy and Chesney?  It *was* wrong for Owen to stick his nose in with the landlord but it was also wrong for them to forge his signature. I'm sure they could have talked Fiz into signing for them. But Izzy did instead, so that Katy wouldn't run off. And credit to Chesney, he's not afraid of Owen who might want to remember that Ches probably has an inner Cilla too! John's home from hospital, looking pretty fragile if you ask me. 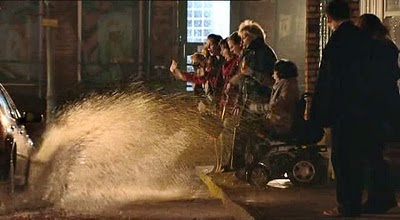 That woman Audrey and Claudia saw was supposed to be Marc's sister. But it looked like he chickened out of something when he told them that. Lying? Sister? Really?  Trevor's back and Janice's got him. Eh? When did he magically fancy Janice??? You can't tell me he went from a beloved girlfriend, to Carla, back to the beloved ex-girlfriend to Janice. Janice??? What they won't think up to get someone out of the show! What's going to fund this big adventure of her? She couldn't even afford to pay her bills so she moved in with Julie. Ah well, at least they sent her off happy, taunting her so called mates and drenching them in a wave.


That bloke in the bar thinks there's a reason Liz is hanging out in a dump like that, well i think there's a reason he's trying to pick up women in a dump like that. Roy has had a blast from the past, his mother has written to tell him that his detested step-father has died. Izzy wants her dad to back Gary for a van for his business. There's a new man in town and he's already got on the wrong side of Sophie and Kevin and he's got a flirt on for Sian. So he's looking for Tyrone?

Emily uses chopsticks! Cool! Why didn't Xin tell them she'd known Tina from way back when they worked at the Pound Shop? That was true so why lie that it was only a few months?  Norris was rude at the dinner party, interrupting all the time to voice suspicions about Graeme and Tina and Xin. And it's a double wedding for the new Platts and the Proctors-to-be. Gail wasn't too chuffed to hear about the double wedding nor that the newlyweds were planning to stay on living there. She blathers on about how each of her marraiges was for love. What makes her think David doesn't love Kylie?

So Mr. Packham, the new head teacher, thinks Russ is gifted? Seems he wants Russ to have special lessons. How much do you want to bet he's actually thick as two planks and needs extra lessons to keep up? It's good to see Betty behind the bar even though it's sad, too.
Posted by Tvor at 11:46

What is it about women pampering their sons, thinking they never do any wrong? I'm not sorry Becky went on a bender; Liz's self-righteousness was getting on my nerves.

And what is it about hiring all these characters who can only sneer and smirk? God, that Kylie had it coming to her.