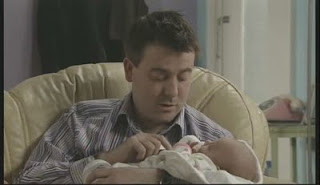 Everyone loves everyone again: Gold Star: Steve and Becky aren't glaring knives at each other and Lloyd even seems up for teasing Steve like a good friend does. What did I miss?

Blonde is really not your colour award: You'd think Marc would have taken off the wig in the police station!


More than meets the eye award: Gold Star: Kylie showed a few cracks in her shell.

Duckworth Charm award: Looks like Tommy has inherited the charm genes off Jack and even Terry. Let's hope he's lot a rum'un like Terry, though.

Deception Award: Gold Star: Steve and Becky going to run off with the kids.

Interfering Mother-in-Law award: Cash Star: Kylie kept the money and married David anyway. At least it paid for the honeymoon!

Coming over all previous award: I thought Mary was actually going to swoon over Jim! 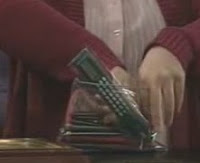 Kitchen Sink award: Gold Star: Mary has a whole stationery shop in her very large handbag. I beg to wonder what else is in there.

Buy yourself some friends award: Gold Star: Underworld girls only going to the hen night to get out of work!

Theme tune for the wedding? Kirk played 'Toxic' on the juke for the stag do.

Reunited award: Mushy Star: Liz and Jim back together. For 5 minutes, at least. He wants to buy her the pub. Methinks that's half the attraction!

Fashion statement: Sally's fascinator. I just can't get into that particular fashion. I think they look ridiculous!
Kylie's wedding dress! Gail figured she looked like a prostitute from the Wild West. I think that was the intention!

Big Adjustment Award: Gold Star: Faye is trying a bit too hard, stealing to show her gratitude and lying for who knows what reason.

Lines of the week:
Betty "I have half a mind to down dusters!" (I love Betty!)
Frank "Never underestimate the power of schmoozing. Nothing beats pressing the flesh" (You can say that again)
Sally to Kevin "That history is precisely the reason we don't have a future" (another shot!)
Betty about Liz "She loves lording it around behind the bar with her dangling earrings and her dangling bosoms"
Sally "Do one, Doug!!"
Jim to Steve "It wasn't that long ago that you showed me a bit of respect" (Did he? ever?)
Kylie "Be a bit pleased. He could do a lot worse" Gail "Not if he sticks to human beings, he couldn't" (and the tranference to Ivy Tilsley is complete)
Jim to Owen "Do you not know when you're beat, Vernon?" Owen "Owen!" Jim "It amounts to the same thing" (nice little nod to Liz's last husband there!)
Audrey "You just walked in on a bit of a bitch and a moan" David "I know, and you were the 'moan'"
David to Gail "You drive everybody to the edge. It's no wonder some of 'em jump off"
David "I can't get married with no pants on!" Nick "it might be kind of romantic, seeing as Kylie won't be wearing any either!"
Kylie to Becky "So you don't wish me luck, then?" Becky "I wish you were dead!" (Whoa, that was a bit harsh!)
David "I'm marrying the lady of my dreams" Gary "I'd hate to have your dreams" David "You should be so lucky...like she'd ever look at you!" (Gary, thinking "oh did I not tell you? she did!" ;)
Kirk "It's not a hat, it's an 'amazer'" Sally "Fascinator!"
Gail "I gave you that money in good faith" (you gave her that money to pay her off)
Solicitor "Do we know when Mr. McDonald will be back?" Liz "There must have been a hold up somewhere" (Ulp!)
Solicitor "Do we know when Mr. McDonald will be back?" Liz "There must have been a hold up somewhere" (um....)
Kylie to Gail "Would you mind if I call you MUM?" (Brilliant!)