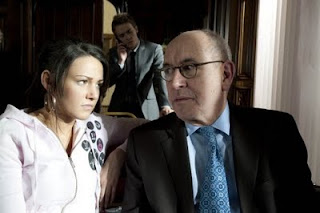 I really did enjoy the wedding episodes this week! The hen night was a chuckle with the added conflict of Gail paying Kylie £1000 to take a hike. Kylie looked like she was considering it for a minute or maybe she was just a bit shocked that Gail would stoop so low! There was some amusing stuff at the stag do as well, particularly Kirk playing 'Toxic' on the jukebox! *snort*

Norris finding out for sure that Graeme and Xin's wedding was inevitable though Tina following him to the venue was a bit naff. She had to convince him not to say anything but it would look odd that she was there. Still, you've got to have that conflict so you need that to happen.

Just the look on Gail's face when Kylie showed up, late, at the registry office was worth the whole thing! I am surprised, though, that Xin didn't wear red. The Chinese believe that red is lucky for weddings and white is worn for mourning. Ok, maybe she did wear the proper colour after all. I've never seen a grimmer looking "Happy Couple"! I thought Graeme might back out at the last minute but seeing as he went through it, I'm now betting that he will actually fall for Xin and they'll go off together, maybe with Xin being offered a job somewhere else.

At the reception, you just knew Graeme's touching speech was really made to Tina who was standing beside Xin (and who'd caught the bridal bouquet!) but naturally, Norris couldn't keep a secret in and Rita really gave Tina and Graeme what for. Isn't Tina still lodging with Rita? I imagine there was no girly giggling over the cocoa that night! It'll be a bowl of Frosty Frosted Flakes!

David and Kylie are joined in unholy matrimony. Toxic probably is a pretty good assessment of both David and Kylie. Will they be happily ever after? Not likely. Nobody on soaps usually are. It should be entertaining, at least but I reckon David is going to get his heart broken and then he'll go off the rails again.

The confrontation between Gail and Kylie at the reception was good, too. Now Kylie has something to hold over Gail and she knows it. The nerve of Ms. Hypocrite Gail calling Kylie a nasty piece of work! Blackmail is blackmail and it only made matters worse. Even Nick went along with the money scheme, giving Gail the cash for it. It must be awful if even Nick disapproves! 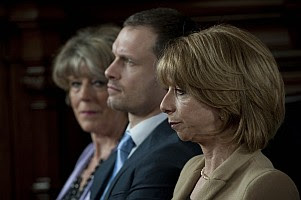 I am surprised Gail didn't decamp to Audrey's for the night. It doesn't really make sense she'd stick around for the wedding night. I guess the Teneriffe flight Kylie bought with her money doesn't leave until the next day.

I loved listening to Norris grumble and snipe at the back of the wedding audience. I loved Gail's sour face, especially when Kylie announced she wanted to call her Mum, complete with Becky's rolling eyes over in the corner, too! I absolutely adored Kirk getting drunk and maudlin and thinking Audrey was coming on to him because she bought him a drink. Andy Whyment was an absolute star in these episodes and I'm not the only one that thought so!

Now. You may wonder about the venue used for the wedding. They used a building called Ryecroft Hall which is in Audenshaw, near Manchester. It's a listed building and is licensed for weddings for real. I've been there and I've posted some photos comparing them to screen shots from the wedding episodes over here. I've also posted a series of photos from the wedding over here.
Posted by Tvor at 19:18

Loved this episode and you're so right about Kirk being a star! I love the lines he comes out with - they keep the show fresh and funny. Likewise, Julie - what a gem she iS! I hope both are on the street for many years to come.