What do you make of "Norris's News"? 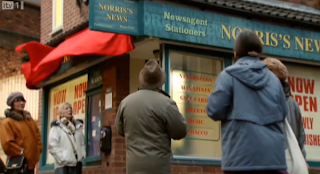 (This post was originally posted by Chewy on the Coronation Street Blog in March 2011.)

Tonight we got our first look at Norris's News, first thought? "Shouldn't that be Norris' News?" Second thought? "Poor Rita" though you can't blame Norris for wanting to put his own stamp on the place. He wouldn't have thought Rita would have minded, but she did, Mary on the other hand wouldn't have cared either way.

Anyway, I'm glad they dropped the whole Post Office brand from the place anyway, since the post office counter was never really used. The inside looks a lot tidier and modern, in fact it reminded me of Emmerdale's cafe/post office set a little, I hope Norris decides to change it back to 'The Kabin', it feels wrong without it there.
Posted by Tvor at 18:57