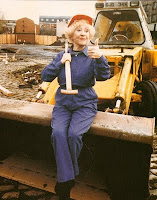 Construction of the current Coronation Street set began on 12th November 1981. Doris Speed aka Annie Walker (pictured) gave the thumbs up to the new set, as it marked the end of the old damp Grape Street set. The new set was first seen on-screen on 17th May 1982.

At first the set only incoperated Coronation Street, Viaduct Street and Rosamund Street. The first big change to the set was the demolition of Baldwin's Casuals and the Community Centre and the construction of the new factory, houses and shops which were completed in 1989.

The second change to the set was the addition of Victoria Street, and the Bookies, which now seem quite integral to the street itself. The last big change was the construction of Victoria Court and its redevelopment of the Warehouse behind the Medical Centre. 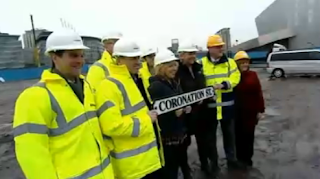 Now in December 2010, the set nears its last days, as a new era dawns for the cobbles of Coronation Street.

As it prepares to move to its new site in Trafford at BBC's Media City. Except this time, it's Katy Cavanagh aka Julie Carp giving the thumbs up!
Posted by Tvor at 08:48