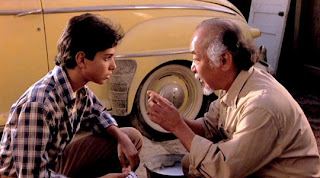 Loveys, there's an old dog wandering the cobbles unsure of his future; not knowing where he's going to sleep tomorrow or the day after, but that's enough about Kevin Webster, let's get on with it, shall we?

So with a swish of hair extensions and the reek of Nivea aftersun lotion, Liz McDonald returned to sunny old Weatherfield 'cos she missed her princess! Poor Amy, Liz is the only person in her life who hasn't been to the nick - yes loveys, even I've spent time in 'the big house' but that's another story. Liz finally caught up with Amy in The Kabin where Mrs Doubtfire and Nanny McPhee (or Rita and Emily as they're more commonly known) were turning Norris' shop into a creche for the children of one night stands and affairs!

I'm glad Liz is back and it's not just 'cos she's got a load of cheap ciggies, it's 'cos she's the only person who can look at what's going on in her Steve's life and blame the one person who deserves it: Becky McDonald! She's more baggage than Elton John going on a day trip to Rhyl that one! Tracy's got 'em over a barrel cos of Max. So what does Becky do to try and help Steve with his shattered friendships and failing finances? That's it loveys, she wants to buy Max a flamin' karate suit and enrol him in classes! They should train him like that Mister Miyagi off Karate Kid and get him doing a bit of 'wax on - wax off' on the Streetcars taxis! Child labour, you can't beat it! Belting!

Weatherfield has now become a very dangerous place to light-up a ciggie in and it's all cos of Claudia. When Claudia, Rita and Audrey are together, the hairspray particles in the air reach a critical level and even using a lighter is like suicide! One ciggie and yer up in flames! If you stand too close to 'em in The Rovers they create a cloud of Silvikrin firm hold hair lacquer that can actually freeze you to the spot!

The other big news on the cobbles has been Sophie and her very elegant swan dive from the church roof where she did a triple pike and double somersault before gracefully landing on a car! That weird fella with the eye make-up who looks like he should be singing in one of them gothy bands - or whatever they're called - rather than running a church choir was up there with her. I hope he regrets calling Sophie and Sian sinners cos there's nowt more sinful than that haircut he's got!

'But Brenda, don't be so flamin' judgemental about religious folk, they're not all over eighty with loads of nose-hair!' I know that loveys but if he's a pastor then I'm a flamin' supermodel!

Also this week, blah blah Xin blah blah Graeme blah blah Tina yawn yawn wedding zzzzz zzzzz creating a past for 'emselves etc etc she's falling for Graeme...enough said...
So who was that lass coming out of Marc's house? His sister? Well she had a cracking set of legs by all accounts so that excludes me. She was tastefully dressed so that excludes every resident of Weatherfield. Imagine if it was Marc dressed as a lass! That would be just crazy wouldn't it?! Not really loveys, if I had a pound for every transvestite I've met since working at Streetcars then I'd be a millionaire! I remember when Ken experimented with some of Deirdre's clothes but her belts made such a clanking noise you could hear him approaching from a mile off!

What annoyed me the most this week was that box of stuff Tina gave to Rita. She was giving it all that Yoda talk: 'Oooh made moving into that flat more bearable you have.' When I gave her that picture of her and Alan Bradley in Blackpool she didn't even want it! It took me ages to get that framed an' all! Selfish!

So that's about it loveys but remember this, as with all things in life smoking is what you make of it, it can be a hobby or it can be an addiction but whatever it is, make sure you buy yer own 'cos yer not having any of mine!