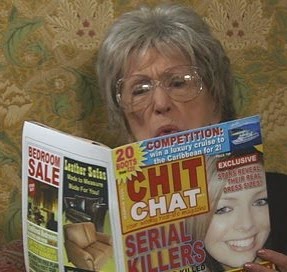 Here we go with Coronation Street chit-chat, a catch-up of some of the shorter news stories that haven't made it into their own blog post.

Current Corrie cast
Sally Dynevor (Sally Webster) attended The Silver Butterflies event at the Mere Golf Resort and Spa in Knutsford which raised thousands of pounds for a cancer charity. Read it here.
The Guardian cries out for Corrie to DO SOMETHING with lesbian Sophie Webster. Read it here.
Les Dennis (Michael Rodwell) says it'd be nice to do some stand up comedy. Read it here.
Jack P Shepherd (David Platt) was snapped by paparazzi filming in Liverpool. See pics here.