Panic stations for Gail who shoved Barbara back into the house so she and Michael don't see each other. In the process, she finds herself committed to going to the funeral. She does manage to veer Michael away from the house and gets lucky that Barbara doesn't see him through the window. She even tempted him into the pub with the promise of a real drink. Steph and Michael head over and guess who's there? Andy and the young blonde and Steph isn't best pleased to see her boyfriend with a pretty girl. He still doesn't even know her name, either.

Gail promises to be at the mediation but she's also promised to go to Gavin's funeral. She's got to pretend she doesn't know Andy because all Gavin's friends and family would know Andy. Now Gail has go to the wake to speak to Gavin's mother. She did say she had to be somewhere, what she should have said was that she had an appointment and it would cost her if she missed it. But no, she gave in. Gavin's ex is now very sorry and wants to make peace with Michael, even after admitting she purposely turned Gavin against his father by pouring poison in his ear all his life. Nice.

David's depending on Gail supporting him at the mediation session. He can't deal with Callum on his own? Yet Gail isn't allowed to be in the actual session so yeah, he's dealing with Callum on his own. Except it's conflicting with the funeral and even Gail can't work out how to be two places at once.

The mediation didn't go well, this time for David. He was frustrated and angry that Gail didn't make it. This time apparently the mothers were allowed in to the meeting. Callum's mother did most of the talking for him at first and later Callum painted himself in a shining light and Kylie in a very bad light, pretending he wasn't the drug supplier. Naturally, that set David off. He was quite angry with Gail for not showing up but there's no guarantee that things would have been any better with her there. Andy saved the day by lying that Gail was late because he had a health issue. Poor Gail. After the day she had and she still couldn't tell Michael why she was really worried.

Her worry is rubbing Michael the wrong way because he doesn't understand what's behind it. 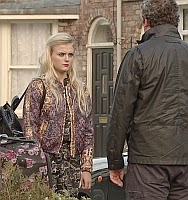 Bethany ended up really ticking off Steph and it nearly came to hair pulling before Gail arrived and blew it all out of the water. It's Bethany Platt, Sarah's 14 year old daughter! Whoops! She's making it sound like Sarah's working all hours and was aware she was going to Manchester. Bet that's a lie. Yep. that's a lie. But she's determined she's not going back. Bethany is due to go back to Italy on Sunday. In the meantime, she's really buttering up Gail to make sure she could stay. She managed to get out of working in the Bistro in favour of the Salon and proceeded to get Audrey on her side by helping her with Anna Karenina and pretending she's been picked on in school when in reality she probably runs circles around the teachers and leads the popular in crowd.

It comes to the day Bethany is supposed to fly home to Milan but she has no intentions of it. I also notice for all her formative years have been in Italy, she still likes a nice cup of tea. She desperately threw Nick's car keys in the front garden. They couldn't have got lost, it's not like it's a bog or anything. It would have taken him 30 seconds to pick them up so why didn't she just run away without that stupid gesture? ah of course, because she's 14. She ducked into Barlows Buys but was outed pretty quickly by Todd but she's not getting on the plane and it's probably true, nobody can really physically force her at her age.

Now that Gavin's dead, Andy has to move out since he wasn't on the lease. Steph has a spare room, what a coincidence! Though I don't suppose he'll use it other than for storage. Not quite the romantic "let's move in together" that Kal and Leanne had but needs must. Gail insists he go to the funeral and since he's probably known to the family, it would look odd if he didn't.

David is still having to take Max to see Callum, this time to the park on a snowy day (Great shot of them coming up the steps into it, I've stood right there and seen those houses!) I suppose having Dave and Callum with Max together was one of the compromises.

Roy is probably right not to trust Sharif's motives. He does seem to be economical with what he tells people, especially those he sees as a rival. Sharif won the plot but it was his idea that they share it but it's not going well, not even in the planning. 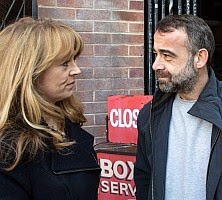 There's definitely something going on with Jenny. She reacted really strangely to Maddie's story about getting pushed in a pool as a child and freaked out when she thought Jack swallowed a shallot and might choke. I wonder if she lost a child to an accident? Kevin hasn't seen Jenny since she freaked out over the incident with Jack and the shallot. Sally was pretty bitchy and only because Rita's upset. Jenny's having second and third thoughts about the relationship so Kevin has it out with Rita with Norris pouring his snarky remarks in to the mix. And really, it's not Rita's business to approve of anyone Kevin dates. Jenny was persuaded to stay on. She's very good with Jack even if she's been a bit over-cautious.

Looks like Lloyd and Steve may finally find their friendship again over the shards of a broken chair. It's a first step, anyway. The cab office wreck of a chair was fixed. Steve feels ready to face the world. The only problem is Michelle has discovered some tax bills that Steve hid away and they owe a big chunk. I wonder if they could make payments? How do you tell someone who's finally pulling himself together news like this? Not easily. Michelle is being good with Steve but it's a worry. He's going to sort things out but how? Buy discount loo roll? Need do buy cheap for decades to save over ten thou. Tony's got a good idea. He sold back the house that he bought Jason and Eva and can loan them the money. Brilliant!

Tony's supposed to help out with the tax bill but he doesn't want Steve to know until the house sale money actually comes through. That's smart. Todd "accidentally" let Tracy know that Tony sold the house so he's got or will have cashflow. Now Tracy wants to get her hands on it to expand the business. Conflict warning!

Steve and Lloyd seem to be getting on better. Steve can't figure out what's best to do with the tax man but is very glad Michelle is being so supportive. Exactly the best time to propose, right? Wrong. But she said yes anyway!

Michelle, not wanting to add pressure to Steve, suggests a long engagement which of course sparks off his insecurity and he thinks she's trying to put him off. Lloyd worries about Steve's rash and sudden proposal and it's true, it could very well have been Steve's reaction to the shock of the tax bill. He's done plenty of impulsive things in recent months. Now his insecurity has made Steve call it off and she's upset because she knows it's got more to do with his illness and it's very difficult. 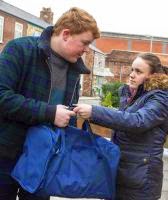 Faye isn't so happy that Owen plans to make her a priority, full undivided attention. Craig is really getting anxious about the impending birth. Faye just can't seem to get the words out to tell her mother what's happening, especially after Anna's remarks about Katy having a baby so young. They found out that Dev's flat is still empty and Faye reckoned that's as good a place as any. She makes Craig steal the keys and they're in.

Craig and Faye nearly got caught out talking by Sally and Tim who think Craig is her boyfriend. Craig is really freaking out about the baby being born in the flat. Since she wants him to take the newborn to the hospital and leave it there, Craig thinks a trial run is in order but he can hardly sit still while waiting for the bus and then his bag got stolen and dumped in a puddle so he missed the bus. Todd hollered that he hoped there was nothing fragile in there. No but there will be and can you imagine if there really had been a baby in the bag? One more reason for Craig to stress.

There's going to be a butler auction in a few days. Sean and Billy argued on who would be the auctioneer, Sean insisting he knows how to work a room. I wish he would have remembered (or the writers) that he used to be a Bingo caller for a short while. That would have been a blast from the past.

On the day of the Butler auction, Liz has got concept wrong. It's butler, not love slave! She wondered if they would have to do housework without clothes! Kal and Zeedan are shaming Sharif into dressing up like an actual butler in formal wear.

That stop that Katy wanted to make was to the hospital so Sinead could say goodbye. That was nice. Bye Bye Katy. Chuckled at Beth and Kirk's discussion on whether Goofy is a dog or a horse. Who says Kirk is stupid? It was Beth that thought he was a horse when we all can clearly see Goofy's a dog! Also chuckled at Callum making out that he and David were a couple to those women in the park! Nice little scene between Steve and Leanne, two characters that rarely interact.

Of course, Kirk did ask "what kind of horse walks on two legs"? So there was a breakdown in his logic in the end.
Also, Sean did mention that he used to be a bingo caller. Happy to see some continuity.
Totally agree with you that the scene between Steve and Leanne was very nice.