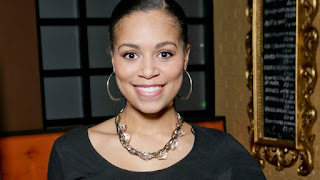 Tisha Merry, who plays Steph Britton, is a little belter. There, I've said it.  Tisha as Steph has been on Coronation Street for just over two years now and she just keeps on getting better with every appearance.

We don't know that much about Steph. She arrived as a friend for Katy Armstrong, flirted with Ryan Connor, left and returned again later the same year. She was then given a job as a waitress at the Bistro and has been there ever since.

While Steph has been a part of some major storylines, she's never really had one of her own. She moved in with Tina and tried to make Tina see sense when Tina revealed she was having a fling with Peter Barlow.  When Tina died, instead of going to the funeral, Steph, Luke and Katy celebrated Tina's life by releasing balloons, a nice touch.  And since then, she's continued to serve in the Bistro while recently being caught up in the Platt family drama.

Nick's promoted Steph to Bistro supervisor, and that girl can stand her ground with the best of them. She's sassy, fun, intelligent, great to watch and is one of those characters, for me, who light up the screen when they come on.  Along with Gary Windass and Izzy Armstrong, Steph is one of the  younger generation that I really love watching.  She's not given any especially funny or fancy dialogue, she just puts a sparkle into everything she does.  She's a backstreet Bistro bobby-dazzler.

I am also quite fond of Steph. I didn't like her at first but she's calmed down. I also really like her brother Luke and would like to see more of him (not with Maria who I don't like).