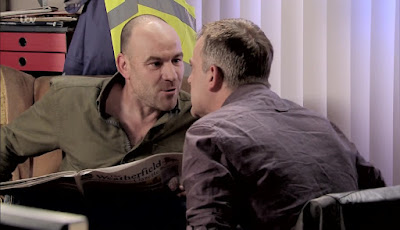 Childish award: Tim and Steve fighting over whose friend Tommy Orpington is. (It *is* quite funny, though)

Pants on Fire award: David lies to the police that he wasn't the one that revealed Clayton's name all over town. Vinny lies to Eileen that the "client" who sold him the fake passports is a flat-buyer for Number8, only she found out Rita bought number 8.

Suspicious Minds: Eileen doesn't trust Vinny. He talked his way out of the casino stop off, pretending a client is interested in Flat 8 but later, she found out that Rita bought Flat 8. Someone has some 'splaining to do.

Fast on his Feet award: Todd did do the 'splaining and he came up with a pretty credible story on the fly.

Throwback award: Do they even have internet cafes anymore? I suppose they must but there certainly aren't as many of them littering the streets.

Best Defence is a Good Offence: Phelan knows how to keep Eileen in line. You don't trust me so there's more at risk than the business project.

Troublemaker: Anna stirring things by telling Gail that Sarah has a new boyfriend. And later, she really went over the top on Faye after finding her with her new boyfriend. It was really unnecessary to be that vicious about it.

Backfire award: If Nick hadn't been so officious with Steve, Steve probably wouldn't have dug his heels in and refused to take the test. 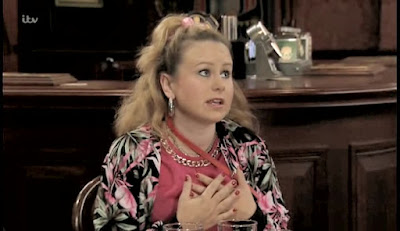 Lines of the Week:
Gemma "I'm like an old peoples' carer crossed with RoboCop" (isn't she just!)
Phelan "He went to a casino, not the Swiss Bank"
Norris to Freddie "Straighten your back, Quasimodo"
Audrey to Freddie "C'mon now, the truth. Otherwise it'll be the Chinese Whispers version in 3 days time" (that's the gossip mill version.)
David "My life means nothing now and someone has to pay for it"
Phelan "The things we do for money" Vinny "At least it's a lot of money"
Liz to Steve "You've got a lovely little McDonald growing in there" Michelle "I sincerely hope you're talking about me" Liz and Steve: awkward laugh.
Liz "It looks like you've lost a shoe and found a sock"