(This post was originally posted by Emma Hynes on the Coronation Street Blog in October 2016, reposted with permission.) 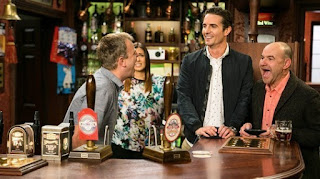 I had the pleasure of watching all five of this week’s Corrie episodes in one go today, and as it’s Saturday, and we’ve already brought you our weekly update, here are a few of my thoughts on the week’s action in lieu of a Friday double review.

For me, the programme is fizzing with a new energy at the moment, and this week saw the first major humorous storyline in a while with the arrival of Weatherfield County’s Tommy Orpington, played by a perfectly pitched Matt Milburn.

Steve and Tim regressing to children in the face of their idol was farcically fabulous to watch and an ideal comic foil to the consistently compelling drama coming our way courtesy of camps Platt and Grimshaw-Phelan. It wasn't so much a case of 'never meet your heroes', as 'never meet your fans', however, as a kick about in the street resulted in an injury for their favourite player.

We saw Lauren’s Dad assault David, and you’d wonder if that will be the end of that saga. In a way, it isn’t for Bethany, regardless of whether we see the two bullies ever again, as she appears addicted to exercise and struggles to eat. Her scenes with Sarah were beautiful, as she confessed that the gym helps to take her mind off all the dreadful things that have happened. A moved Sarah allows her back under Gary’s tuition before promptly snogging him in the street. I like the prospect of these two as a couple, and it will be interesting to see how the dynamic between all three develops. Hopefully it will mean good things for the very likeable Bethany. 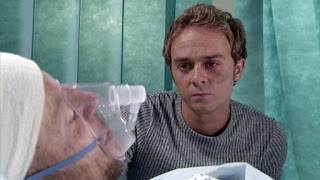 Jack P. Shepherd continues to wow as David battles to cope with reconciling himself with the possibility of injustice. As long as he’s hellbent on revenge, he is all too aware that he cannot be the father Max and Lily need, but can’t let it go at the same time. Nick and David’s relationship has blossomed over the years and I love how they are there for one another in a way that nobody else can be. Friday’s episodes gave rise to yet another great scene between them at the back of the Rovers in which Nick winkled out of David that he had visited Macca in hospital and was prevented from doing him harm when interrupted by a nurse. A nurse, I might add, who was sorely, and perhaps conveniently, lacking concerning patient confidentiality.

Phelan, Vinny and Todd are tense in the face of a perma-shrieking Eileen who discovers Rita and a client who, in truth, is sorting Vinny and Pat out with new identities, have put a deposit down on the same apartment. Quick thinking Todd comes up with an excuse involving a fabricated con which is a damn sight milder than the truth. This prompts Eileen to accuse the lot of them of tricking her neighbours and wasting Jason’s money, and this in the same week that she forks out no less than £30,000 on tiles. Will Phelan manage to get rid of them, or will they be the new olives, popping up in every renovation and new build for the next decade?

I like the tension that’s continually building here, and all the interweaving strands of the story. Phelan and Vinny have set themselves two months to complete the fraud and escape intact, but I hope it goes on longer than that, as I'm enjoying it, and it’s certainly a story with plenty more mileage in it.

The only prominent tale of the week which had me struggling a bit was that concerning Freddie and Audrey. I’m not sure I’m getting the requisite chemistry between them, and they don't come across as a pair excited by the first flush of a new relationship. Firstly, Audrey turns down a night out with him and despite this is still jealous to find he took Rita instead. Then Freddie injures his arm attempting to learn to dance for Audrey, but refuses her offer of moving to Grasmere Drive so she can look after him. I'm not quite sure how Fiz and Tyrone are considered a good substitute. Also, he’s only broken his arm, why does he need to move house? This story did give us a chance to see Rita at her most glorious, however, dolled up to the nines and off to the former Zambezi club AKA an amusing string of names that revealed the generation from which those reminiscing belonged.

All in all, a very watchable week on the cobbles. It's infused with a pace and energy which has me feeling enthusiastic about it. I'm also loving the premium on dialogue, and my stand out scenes generally involve characters speaking at length, something which we are being treated to plenty of, and long may that last.