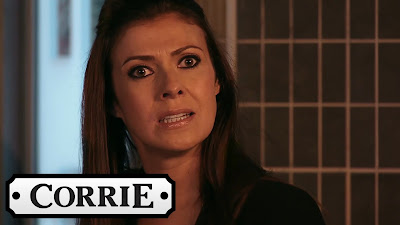 Kym Marsh, who plays Michelle McDonald in Coronation Street, has admitted that she secretly fancies one of her co-stars on the show.

Talking to the Mirror, Kym said that she once had a picture of Simon Gregson (Steve McDonald) on her wall years before they were to star as TV’s Steve and Michelle McDonald.

Kym, 40, said: “I actually had a poster of Simon on my wall when I was younger, which is so weird. He was a heart-throb in the day! I love Simon, he’s gorgeous like a teddy bear, he’s lovely.”

She said filming can be tricky because Simon is such a joker, adding: “Sometimes it’s really difficult. It’s a skill, you have to look slightly past him so you can’t see his face. We just try to complement each other and make it funnier. We enjoy working together.”

Kym can’t give too much away about the Corrie plots but admitted Michelle and Steve face a rocky time.

Of her TV mum-in-law Liz, played by Bev Callard, she said: “She’s amazing.Beverley is such a giggler. If I have to tell her someone’s died or something she’ll lose it and start laughing. We get told off sometimes!”