Sally Dynevor on Corrie's Sally as "Margaret Thatcher on acid" 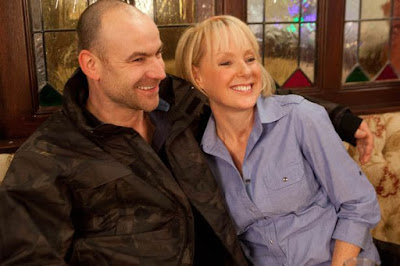 There's an excellent interview with Sally Dynevor, who plays Sally Metcalfe, in today's Mirror. She talks about playing Sally on Coronation Street for 30 years and how her character is turning into an even more snobbish social climber.

She talks about the outfits that Sally's currently wearing for her political career in the show and says: "Oh my God, sometimes I’m like, 'Do I really have to wear that?' I look ridiculous. When Kylie Platt died, which was obviously a really serious scene, you just see me walking across the street in what can only be described as a clown outfit. I look like Margaret Thatcher on acid. Horrendous."


"There was this moment where I was told to go over and sit next to Helen Worth, who plays Gail, and thank God the camera wasn’t on me, because I just tipped right over and fell. Everyone said it was so hard to keep a straight face."

Sally says the wardrobe department are now planning on her channelling the style of her undoubted political icon.

"We’re taking her down the Theresa May route, kitten heels, quite smart. Because if there’s comedy, I want to do it, not the clothes."

Sally talks about how much fun it is to work with Joe Duttine, who plays Tim.

"The awful thing is that I can’t work with Joe, because we laugh so much. I look at a scene and think, 'OK, nothing funny in there,' then we start and I’m just laughing my socks off, it’s just a simple way he says something."

She also mentions Sally's current storyline with Phelan and her real-life family and children.  She also says she doesn't rule out leaving the show to move on to try her hand at something new.

"Of course it would be scary. I would like to, but who knows if I ever will. I’m realistic enough to know I just don’t think my path would go that way, but who knows," she says.

The actress is also about to take on a challenge of a different kind – cycling from London to Paris with her husband for charity in memory of her friend Morag Siller, who died from breast cancer in April. Support Sally and donate to prevent breast cancer at justgiving.com/fundraising/sallydynevor-timdynevor
Read the full interview here.