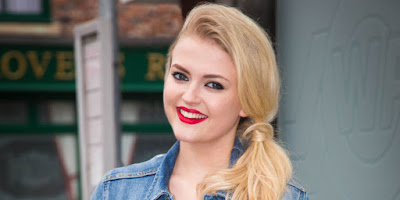 She talked about Bethany's current storyline which has seen her taken to exercising to extreme in the gym and making herself ill with the worry over her treatment from the school bullies.

Lucy says: “Bethany thought that if she lost weight the bullies wouldn’t hate her anymore, so she’s been going to the gym and taking diet pills in order to lose weight. Even though the bully, Lauren, isn’t around anymore, the scars from the comments are still there and she feels she’s big, so she’s carrying on going to the gym and trying to lose weight and sneakily taking diet pills.”

While her exercise obsession and a growing crush on Gary heralds worrying times for the Platt family, Bethany’s bullying nightmare is finally coming to an end and she is about to get a pleasant surprise when she discovers Lauren has been permanently expelled.

“The head teacher says that she’s been very brave in coming forward and that because of her a lot of other girls came forward to say it happened to them, too,” Lucy says. “She goes home and tells her mum and gran and then she just bursts into tears because she’s so relieved that it’s all over.”

She also says that she doesn't get recognised when she's out and about.

“I look quite a lot different to Bethany because obviously I wear make-up and I am nearly 21, so I wear different things,” she says. “This weekend  I went out with Colson Smith, who plays Craig, and he literally couldn’t go for two minutes without somebody stopping him, whereas nobody recognises me at all.”