I was Alma Baldwin's body double in Coronation Street


Every now and then on Twitter, I’ll spot something intriguing involving Coronation Street.  It could be a stage show featuring an ex-Corrie cast member. Or it might be a personal appearance from someone currently on the show. Usually, it’s something fun and friendly that fans have been up to, which makes it perfect for inclusion on the Coronation Street Blog.  And this week, a tweet caught my eye which made me smile a great deal.  It came from a lady called Irene Estry, who’s on twitter @IreneEstry.  Irene’s tweet said that she used to be the body double for Alma Baldwin in Coronation Street... well I had to find out more! And when I started to research Irene Estry, I discovered that there’s a lot more to her than being Alma’s body double in Corrie.  We’ll get to that bit, of course, but let me tell you about Irene first. Irene Estry trained as a fitness teacher and choreographer in the 1980s. At the age of 41 she became the first teacher in the north outside of London and this was right at the start of the health club and fitness boom. In 1982 the very first health club of its kind opened in Manchester, called Drummonds. Irene received a call from Drummonds’ owner to ask if she would teach there – and he invited ITV and some of the cast of Coronation Street to come along to the opening.  Irene says: “Everyone joined in, and Pat Pheonix (Elsie Tanner) asked me into the ITV studios to teach her privately, and it all escalated from there.  Over 35 years later, most of the cast at some stage have worked with me. They used to call me ‘The Healthy Lunchtime Option!’”
Irene continues to work freelance now, offering her fitness and wellbeing programme, to many clients, including some of the current Coronation Street cast.

So, how did a fitness teacher end up being called into action on the set of Coronation Street as a body double for Alma Baldwin? Irene tells us that when Amanda Barrie, who played Alma, joined the Coronation Street cast, it was remarked on at ITV how similar she looked to Amanda. “So Amanda Barrie and I finally met,” Irene says. “We used to giggle about looking like twinnies. And then they asked me to stand in for Amanda when she had to take time off work. And so I did a few walk-on scenes in her clothes over that period.”
After Alma passed away on screen from cervical cancer, years later Mike Baldwin developed dementia in the soap. And in one of Mike’s final scenes when he is wandering the streets crying, he calls out for Alma, and imagines that he can see her.   In that scene, Irene was filmed as Alma.  She says: “I had to walk out of the Rovers Return, look at him in bewilderment and quietly walk away. In that scene you see my face, and they had made me up like Amanda, she is much lighter skinned then me.” So there we have it – a tiny little snippet on twitter revealed a wonderful woman. Irene Estry tells me that at 75 years young, she truly believes that age is no barrier to achievement. Certainly, her infectious enthusiasm for life and her energy came over in the interview and it was an absolute pleasure to have interviewed her for our fan website. 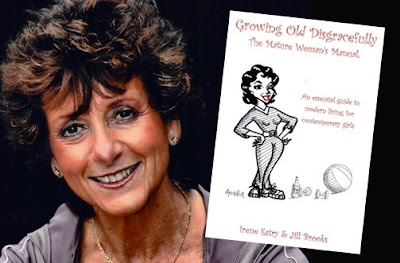