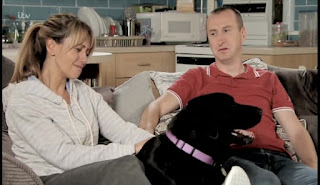 Maria is broken hearted as you would be. Poor Ozzy. Caz wants to take the dog to the vet for Maria but Kirk is family and gets to do it. They had the vet come to the house instead, much less sterile. Ozzy passed, surrounded by the people he loved. Not sure singing and crying at the same time is going to calm down a stressed dog like it used to but that's exactly the kind of thing people might do. Caz is happy that she can be a support for Maria. This just might be something that brings Beth and Kirk back together.

Then Maria gets a call from her "husband", that one that everyone has forgotten about and she has to go to London. Caz assumes she can just invite herself along. Maria had to be blunt with her. It's never going to happen. And she has to move out but Caz doesn't want to go. She cozies up to Liam and Kirk can't say no when she asks to stay and Liam wants her too, as well. Then Caz gets her hands on Maria's new credit card. Uh oh. We see later, she is clearly been taking full advantage of that credit card.

Bethany's suspension is over and she's got to go back to school. She's scared, as you would be, since Lauren will be back as well. Looks like Lauren's father is as much of a bully as she is. Lauren has been permanently expelled because others came forward as well. It's over now.

David is keeping a close eye on Macca via that Friends site and Gail has discovered it. It's only fueled her worry more. In the meantime, Macca is bragging about good news and a family liason officer is on David's doorstep. Clayton is being downgraded to a manslaughter charge. Sounds like he could get convicted of murder but will definitely go down for a lesser charge and lesser time. That kind of popped the cork on David's rage. It was a good conversation he had with Maria who's been through something similar. Focus on the children. But I don't think David's ready for that, yet. Gail wants him to take grief counselling and she's insisting but I don't think it'll do any good if he doesn't really want to go. 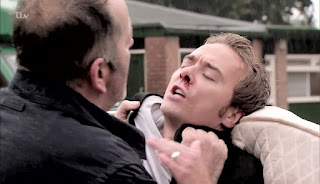 David went to the grief counsellor but naturally, since he didn't want to be there, it was pretty much a waste of time other than something David could use against Gail when he wanted some time to himself to stalk Macca and his mates at the Dog and Gun. He ended up on the wrong end of Lauren's father's fists, however. The man had been following him all day. Seeing as he's three times the size of David, David pretty much admitted he was avenging Bethany but I would have gone straight to the police anyway. Perhaps David being in the wrong place at the wrong time might have given the police pause for thought. Still. The police already believe David that he cut Lauren's hair on her ask and then she walked away. Gemma backed him up. So the police, on this issue, should have been able to charge the dad because David could say he told the man what he wanted to hear, under duress.

Nick gives his baby brother a talking to but it goes in one battered ear and out the other. But something they talked about, that Clayton wouldn't have his name all over the media gave David an idea. He found an anonymous cyber cafe or something (do they still have those?) and decided to reveal Clayton's name on a newspaper article even though Clayton's under age and there are laws about that. Even if the post gets deleted, some people would have seen it before it was. 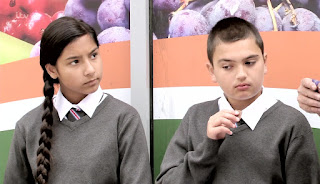 Erica isn't able to handle the twins very well and they seem to run rings around her. She tried Mary's advice. It seems to have worked. Kind of. I think Erica might have missed the point but never mind. Andy is still writing his horror fiction which isn't impressing Steph because he's shirking his other household duties like getting someone in to fix the dishwasher. I think she should have asked Eileen as the de-facto renter, though, shouldn't she? Leanne joked that Steph would be in the running for the temp job covering her maternity leave and now Steph figures Leanne doesn't really think she can do the job properly. Andy stuck up for her with Leanne behind Steph's back. She took his advice and offered Steph the job. Yay! Just an aside. If Michael is moving back in with Gail, is he still going to help Andy and Steph with the rent? Leanne and Nick are back and she's still insisting that the baby is his but I don't think Eva fully believes her.

I thought Eileen had already quit Streetcars? Guess not. Anyway, She's thinking over what Billy said about Pat and Todd is making up stories to assure Billy he was wrong about Phelan but every now and then, Todd looks very thoughtful. yes, I'm certain Todd has an agenda here. Billy doesn't buy it and can't get why Todd is so messed up. Todd is still anxious to keep in Billy's good books so it seems likely he really was sincere in his feelings for Billy. 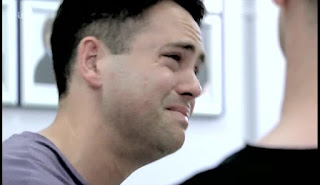 He decided to help Billy and his crew stripping out a squat (an abandoned house) and he had an accident, a jab with a needle. Heaven knows what was in that or who it had jabbed before. Off to the emergency department. That's a scary thing really, isn't it? If it was a rusty nail, you could get a tetnus shot and you'd be ok but in this day and age of disease, a needle is far more dangerous. Did they bring the needle to the hospital, I wonder? While Todd and Billy sat in the hospital, we *finally* got some insight into Todd's past in London. An affair with a married man, a man that left his family for Todd who got diagnosed with HIV. It was someone he really, really loved and the man went back to his wife. Todd has never been able to trust completely after that. Billy's not quite ready to take Todd back and give him another chance but it sounds like there's hope. Billy really seems to be very cautious in relationships.

Over at Platt towers, Sarah walked in on Michael in the bathroom and guess what? He's moving back in. Then Sarah gets some news. She has a chance to sell her shares in the company she worked for in Italy. That's going to be the push for Sarah to move out and oh look, there are new flats being built!

Todd is determined to back out of the job with Phelan. He won't blow it all, but he's put him on a notice and he's quit his job. He's more concerned with getting back with Billy and being a better man for him. Thing is, Vinny and Phelan don't want him to quit. He's more of a loose cannon that way. Todd was horrified to see that Sarah had signed a contract for the flats. How do you talk her out of it without spilling the beans? Maybe you don't. But Phelan managed to put Todd right by convincing him that Vinny really is a dangerous man to cross. As much as Phelan is a bully and a hard man, I don't think he's willing to cross that last line for money. So Todd is going to stay on but insists that Sarah get her money back when it all falls apart. I don't think Billy's going to be too happy to hear Todd isn't quitting after all and Phelan put a word in to soak Todd out of some more profit for one of Billy's charities. Now Todd has even more incentive to stay working with the scam. It did have the effect of getting them back together, though. 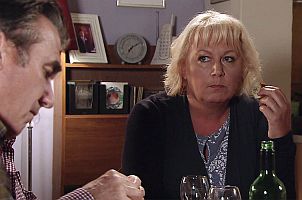 Eileen is throwing herself into the building project and spending thousands on tiles, much to Vinny's horror. Why can't he just send it all back and get refunded? Eileen decided to quit Streetcars and go full time on the building project. Were they actually paying her and anyway, when does Concept Executive mean you can be ordering things without authorization? He's furious but she's not scared of him though Todd is. And he can't tell his mother why she should be without giving the game away.

And where is Sarah getting the money for the mortgage payements? She works in the pub though has been on medical leave until now, you wouldn't think she'd make enough to secure a mortgage and make the payments.

Freddie wants to take Audrey clubbing, well, to a long standing club where he used to work back in the day but Audrey isn't interested. PRobably doesn't want to encourage him, I guess, but boy she sure shot herself in the foot. He asked Rita instead and Audrey has a history of fighting over fellas with Rita, doesn't she? She gets jealous but it's her own fault. 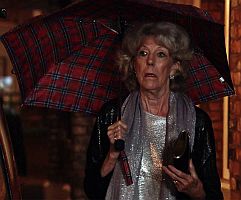 She spied them coming home and we heard from Rita that Freddie propped up the bar all night which he also admitted to Audrey so she asked him to take her dancing. He didn't seem best pleased judging from the look on his face, though. I enjoyed that thread running through these episodes, with all different people remembering the club under different names and Freddie and Rita discovering that they remembered each other from back in the day.

Cathy is now regretting showing a less than flattering side to Roy but you know, people have all kinds of sides and if you love them, you accept them for who they are. Tyrone is worried about Roy, though. He isn't so sure Roy really loves Cathy and doesn't want him to rush into anything. So Roy decides to set a date for the wedding! December. Fiz is thrilled and Tyrone isn't quite so sure.

Michelle's new wedding client turns out to be a footballer, someone well known apparently, who plays for Weatherfield County and now Steve and Tim and even Kevin are man-crushing all over the guy whose name is Tommy. Michelle doesn't want them going star struck on her client but it turned out that Tommy made friends with Steve and Tim (who was wearing his best pink shirt, bless him) anyway. They were pretty funny, stalking the man, making assault maps of the Rovers to create a "chance" meeting. I don't think Tommy minded all the hero worship at all.