Amber off to the wasteland? 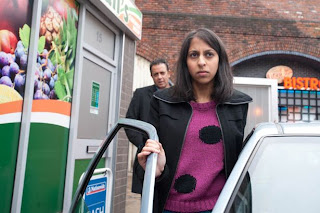 (This post was originally posted by David on the Coronation Street Blog March 2012, reposted to this blog with permission.)

Friday’s double-bill saw the Alahan clan coming to the fore and the (second) departure of Amber Kalirai.

Now, I know Amber wasn’t the most popular character on the Street but I liked her and I’m going to miss her. Sure, her return was only ever going to be a plot device to split up Sophie and Sian (something that could have been done minus poor Amber getting involved) but I’ve enjoyed her return (along with her added attitude) and I’m sad to see her axed for the second time.

I think one of the reasons why she has gone is because she was never given a chance to do anything bar argue with Sunita and kiss Sophie a couple of times. Amber was cool and savvy and I think that they could have axed several characters before her (Sean and Kirk anyone?) and more importantly they could have at least given her a decent exit. It all seemed very rushed and sloppy (as did the sudden martial problems between Dev and Sunita but that's another story) and not at all realistic at least not as a permanent exit.

So what should have been done differently? Well, I would have liked for her to have integrated more with some of the other younger characters, David and Tina for example. I never really liked the pairing of Amber and deadwood Tommy Duckworth last year but at least it was something. Since then all Amber ever seemed to do was have to endure Sunita being a total cow to her or moan about Sophie and Sian. I never understood was why they paired Amber with Sophie in the first place since they were never shown to be great friends during Amber’s original stint. It felt very forced and I think Amber could have benefited from having her own storylines instead of just facilitating others.

I know she wasn’t the strongest character on the show but Amber deserved better and hopefully if she does return in the future she does so as her own character because even now she’s gone she is being used as a plot device (can't say what it is, it's a spoiler!).

I hate to do posts like this where I moan about something, but I felt the need to have a little grumble over Amber’s departure and how she has been wasted over the last twelve months.

I agree she was a wasted character. In her early days, she was an outspoken young girl, but the voice of reason for Dev. When she came back from university, she was suddenly a transplanted personality, a devil child -- all for plot. When she screamed 'you never liked me' to Sunita, all the writers had to do was insert for Sunita "I did, but you changed into blah, blah, blah". That would have satisfied all of us who remember the real Amber.
I don't disagree with Sunita, Amber did turn into a lazy, irresponsible, sponger. Sunita and Dev's marital problems come down to one thing: Dev's personality. It was sudden, but it is workable. He is egocentric, and a complete child. I'm really not liking Karl as a substitute though... Yech.