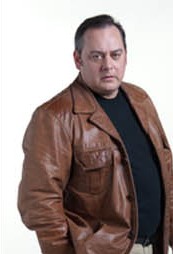 Terry Duckworth comes back to our screens next week. Judging from the tone of most of the comments on various blog posts we've done on the subject, a good many of our readers aren't looking forward do his return.

I've always enjoyed Terry's character. He's horrible and nasty, selfish and greedy and without any redeeming qualities. And you know what? He always manages to shake things up.

He's a classic villain. Even more, he's a Panto villain. He wasn't so bad when he first came to Coronation Street but he evolved into a one dimensional all around bad guy. You just never know what he's going to stir up each time he comes back.

We were all horrified when he sold Tommy to the Hortons. We cheered when Jack thumped him for it. We cheered even louder when Gary Mallett landed a roundhouse on his jaw after the car he sold Vera proved unsafe, ending in the death of Gary's wife Judy. We knew darn well Terry would take the money and run when his oldest son needed a kidney transplant. He did attend his mother's funeral but only to see if there was any money in the will and he avoided his father's funeral with a lame excuse.

Is it unrealistic for him to return to open up a club on Coronation Street? Yes. But I see this as a catalyst which will cement Tina and Tommy as a couple. Tommy never knew his father and as we know, for very good reason. I'm sure there will be more to this story than just a reunion and eventual let down. That's not a spoiler, folks, that's an inevitability. A lap dancing club is a sleazy enterprise and it's suited to Terry Duckworth, wouldn't you say? I reckon it's only going to invite trouble, if it even manages to open. Assuming that Tommy will be told his father's  history at some point, and it's a pretty safe bet that Terry will do something to let Tommy down, Tina will be there to pick up the pieces.

And to everyone that's making cheap shots at the weight Nigel Pivaro has gained over the years, what difference does it make? Most people I know like Coronation Street because the characters and actors are realistic looking. They aren't all skinny, shiny, glossy and beautiful though of course some are very nice looking, they wear the same clothes over and over and most of them struggle to make ends meet like the rest of us.

Terry is who he is. You know what you're going to get. He was a handsome young man who has gone to seed now he's in middle age, through drink, living the low life and since there's no such thing as a magic painting in the garret, it's going to show.

Hahaha! No such thing as a magic painting in the garrett... Terry is what he always was: vile. That's what makes him so great! Corrie has always been good at creating bad characters who nonetheless had streaks of kindness, and good characters who have a smear of badness -- Eileen stealing Owen's money comes to mind. Owen occasionally being nice to people comes to mind. Terry is neither, he is just evil, and it's hilarious to watch. The only thing missing from this villian is a twirl of his moustache, and a young girl tied to the train tracks. (Insert evil laugh here.)

Absolutely, Terry is just a cartoon villain and he always shakes things up, breaks someone's heart (used to be Jack and Vera's, now it will be Tommy) and then leaves again.