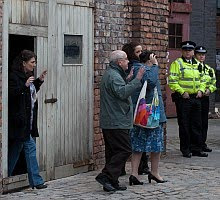 Terry offers Tommy a job. The residents discover the real nature of the new nightclub and take a stand. Or rather a sit-in (with a very funny scene involved at one point. Don't miss it!). Kirsty and Tyrone try to get to the bottom of it and Kirsty's career suffers for it and she takes it out on Tyrone. Tommy lends more than a helping hand to Terry.

Betty's wake in the pub has one surprising bequest received. Sean tries to fullfill the bequest but runs into problems. Sally gets a let down and Carla gets a surprise. Kevin consoles Sally. Are they going to reconcile? What will Sally decide about Jack? Karl and Sunita continue their affair. Julie and Brian get some devastating news.

The War of the Salon comes to a crashing halt as Audrey's health takes a turn for the worse. David tries to make amends and falls out with Kylie.