Lisa George's Beth signs up for another 6 months on Corrie 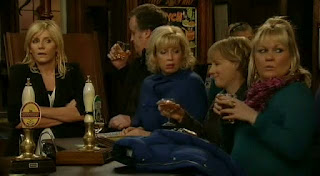 Lisa George's contract to play Beth Tinker has been extended a further six months. She will continue to stitch knickers, torture Tracy Barlow and have her oh-so-blunt say until at least October. This is great news as she's quickly turned into one of my favourites!

She's appeared in Coronation Street before in short parts, as a family liason officer after Tommy Harris was killed and in 1997, a non-speaking extra as a colleague of Martin Platt. She's thrilled to bits to be part of the iconic Corrie. Recent gigs have seen her touring nursing homes around the UK as part of an entertainment act.

In this interview, Lisa says she loves playing Beth who's quite different from her. She's much braver and Lisa loves that Beth says what she thinks, even if she doesn't actually think before she speaks sometimes!

"Beth is cross, brash and bold. She is a soft touch, though, and unfortunately she doesn't think before she speaks!"