For your consideration, another murder suspect on Corrie 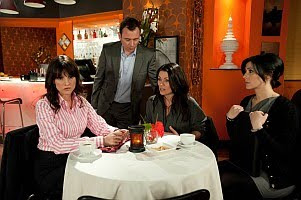 I was thinking about Frank's murder. A lot of the blog fans, and even I was of the opinion that Frank's mother Anne would be the killer. But there are two suspects foremost in my mind now.

This is speculative and when it was written first, thinking that maybe Sally confronted Frank and he could have confessed to the rape to her or threatened her. We now know Frank threatened Carla and admitted the rape.

I've not completely discounted Anne, because she's devious enough to put on a tragic front, manipulative enough to throw suspicion on anyone else but I think she may overhear Frank confessing to Sally (or Carla) and realizes he was as bad as everyone said he was. It would likely be accidental if this is the case.


The other suspect is Jenny, the new client and our regular commenter Frosty mentioned it as well. We know that she initially expressed sympathy for Carla after the rape but recently there seems to be some back-room manipulations with Frank which are coming out this week. She also may have discovered Frank threatening Sally (or Carla) and confronted him. It could have been self defence as well but as she's not a regular character, theoretically she'll be caught, arrested and then discovered to have killed Frank while fighting him off. The more I think about it, the more I'm leaning this way. She's even more an "expendable crew member" than Anne.


Will Anne stay on after Frank's death? She will likely inherit his share of the factory but considering the contention between she and Carla, it's unlikely.