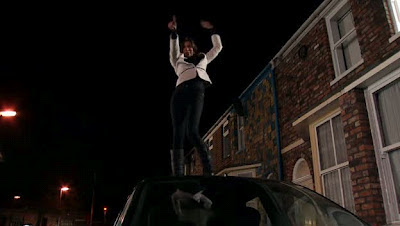 Building Bridges award: Carla and Sally finding common ground and a bit of peace. That was the nicest scene of the week!

NotFather of the year award: Sean hasn't spoken to Violet for ages? You'd think now he's in Dylan's life, he'd be in touch all the time! And he's jealous of the attention Marcus is giving Liam.

Musical ambience: "Never gonna give you up" playing to Ken and Deirdre's separation. 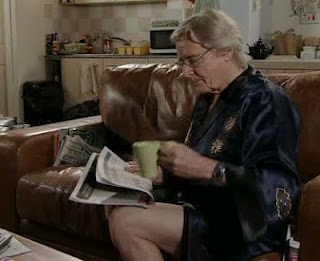 Pretentious twit award: Ken, wearing a silk kimono, listening to classical music and looking for a cafetiere in Steve's flat. He's flirting and conversing with the cab customers on the phone, too.

It's not about you award: Belligerent Star: Paul needs his head knocking against something hard. He wants Eileen and he couldn't see Lesley needs something he can't give her anymore and he can't have it both ways.

Voice of Reason award: As much as it pains me, Tracy really did tell Paul the home truth about Lesley and about him using Eileen. Jason added to the mix with very valid concerns. Paul has blinders the size of dinner plates on. More denial than a thing in denial. 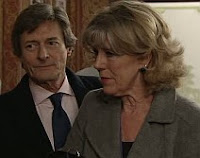 Bridezilla's Back! Mary is in danger of taking over Rita's wedding and hen night if Rita doesn't keep her wits about her.

Extreme measures award: Gail has cut off ties with her mother over Lewis hoping for a bluff. Audrey changed the locks on the salon. David's getting legal advice.

Charmed, I'm Sure award: Sylvia was fawning all over Lewis, even offering free condiments!

Herculean vermin award: The rat managed to lift the lid on the breadbin and get in and close it again! 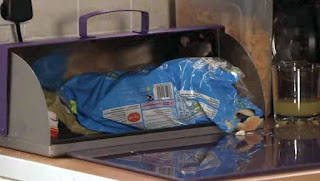 Pants on Fire award: Not sure I buy Kirsty's sob story about her horror ex boyfriend. It was a bit over the top. Bid for sympathy, I think. And Karl is lying about his finances and robbing the safe. Dev said he tried to cancel the holiday and he didn't.

Ulterior motive award: Gold Star: Kirsty played matchmaker with Tommy and Tina to get them out from under Tyrone's radar, I think.

Gracious award: Chocolate star: Fiz was a lot kinder to Sally than she has been or even would have been to Fiz in the same circumstances. And she knew it.

Prat of the week award: Gold Star: Karl robbed the pub. Then borrowed money off Sunita and gambled it on the dogs.

The Penny Dropped award: Copper Star: Stella finally put the clues together and figured out that Karl robbed the pub. 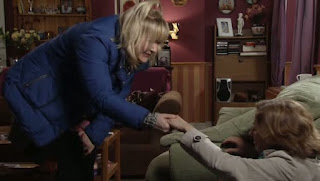 Lines of the Week:
Gail "This is my mother you're conning with your oily gigilo ways!"
Dev "Don't tell me, it was a cry for help" Sunita "No, Dev, it was a scream"
Tracy to Ken "It must be so nice being retired. No work to go to, pottering about all day" (Ironic, much?)
Deirdre about Ken "Sometimes, just sometimes, he's got a face you want to smack" (must run in the family! And may I just say Dev's smug smirking gob is a very close runner up)
Gail "I don't like atmospheres, me. I'm very sensitive to them" (Then don't start them!) and "Me own mother! telling me I'm unloveable"
Steve "Ken doesn't flounce"
Tracy about Lesley "The woman is knitting with one needle"
Ken "You call her Fat Brenda? But not to her face" Steve "NO. no. Be...cause that would be wrong. And possibly suicidal"
Kylie "Love is the drug and Lewis is crack"
Eileen speaking the truth "Lesley deserves a lot more than your guilt trip"
Steve "Come and join us, we'll share a pipe of peace" Deirdre "I'd rather have a cigarette"
Julie "Tracy Barlow's not economical with the truth, she's positively stingy!"
Eileen "I've just seen Gail Platt going to work in overalls carrying a mop and bucket. It's the little things that make life worthwhile!"
Sunita to Karl "Don't worry. I'm not going to kiss you again" (Well, she did!)
Tracy "No need to sneak around now that Lesley Ga Ga's been locked up"
Kirsty "I'd like to bury the hatchet" Tina "Where, in my head?"

"If you haven't any charity in your heart you have the worst kind of heart trouble" to cure it help people, let's unite for one good cause, be a volunteer"save lives"!
mawaddainternationalaid