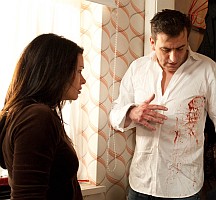 Frank's dead and several people have motives. Sally is the spurned woman. Peter was overheard making threats, was drunk and can't remember. He showed up covered in blood. Carla was screwed on the factory contract deal (and Frank getting off the rape charge added in). Michelle stole the signed contract and without it, Carla still owns her share. There may be others, as well. So who killed Frank Foster? Someone did. Someone confesses but is it to cover for someone else?

Karl's new satellite dish interferes. Tina nudges Dennis and Rita into admitting how they feel. Sunita's feeling taken for granted and Karl is annoyed with Stella. The two of them may turn to each other for a bit of attention. Lewis is still undersuspicion but is Audrey's defence crumbling? Lesley needs to be in a home but Paul still can't let go. Kylie and Brian clash again.