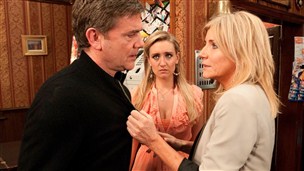 (This post was originally posted by Ruth Owen Varley on the Coronation Street Blog in April 2012.)

On Friday so many big issues were on the Street. To mention one, there was the issue of child custody as Peter told the counsellor that all Leanne wanted to do was punish him by applying for custody of Simon. Maybe, just maybe there is some truth in this claim, but Leanne fired back with the superb retort that Peter leads an 'erratic and unstable' lifestyle and at the moment it would be hard to refute such a statement.

Then of course there was the issue of Anna, refusing to be bought by Owen and her proud declaration that she is 'not for sale.'

Gambling, debt and broken relationships were in there as was the great likelihood of an extra marital affair. Sunita's attraction to Karl is unmissable.

On a lighter note it was good to see Sylvia loosen up, thanks to the sherry and turn herself into a gossip bank. As she said, Karl certainly was getting 'what for' and it seems unlikely Stella will welcome him back any time soon.